Goddess of the Week: Elen of the Ways 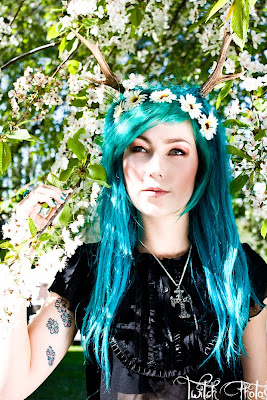 Here is another lovely picture by Alex of Twitch Photos. The image reminded me of the antlered goddess Elen of the Ways - sometimes called Elen of the Leys.

Pagan Historian Caroline Wise, the leading expert on this ancient British goddess, believes that Elen may originate from the time that reindeer could be found in this land. She was seen as guiding the animals on their migratory routes - and also guiding ancient shaman on spiritual journeys into other realms.

Caroline believes that Elen has appeared in different aspects throughout history - as a green lady of the forests, as a guardian of underground streams, as a Grail maiden and as a bride of kings.

Today she is a goddess of ley hunters and can appear as a guide for those embarking on shamanic journeys or other spiritual quests.

Caroline Wise first wrote about the Goddess Elen in her now out-of-print book Elen of the Shimmering Ways, published in 1986 by Spiral Press, and then in the Guide to Legendary London

Elen is said to appear in may guises, sometimes unexpectedly, to lead the way to spiritual discoveries. Perhaps that is what Elen is doing here, appearing as a beautiful antlered girl in a woodland setting in Alex's lovely photo.