Into the labyrinth of the Minotaur 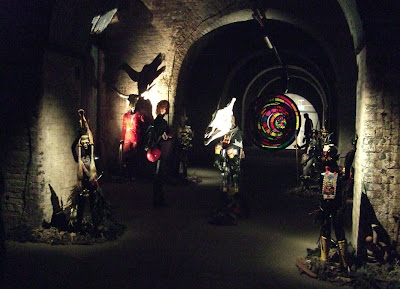 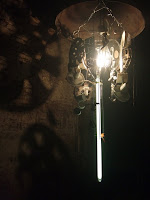 I took these pictures at an art installation called The Minotaur, which transformed The Old Vic Tunnels, in London, into a subterranean maze.
The exhibition was put on by Lazerides Gallery Group following last year's Hell's Half Acre.
While the 2010 event was themed around Dante's Inferno, The Minotaur was inspired by the ancient Greek myth of a monster that dwelt in an underground maze and whose hunger could only be quenched by the blood of beautiful youths and virgins. This unnatural creature, described by Roman poet Ovid as "part man and part bull", was eventually slain by the hero Theseus with the help of the princess Ariadne using a ball of twine and a magic sword.

The artists who took part in the exhibition used giant frescoes, interactive installations, films and slide shows and giant sculptures to interpret the ancient story in various ways. The labyrinth was displayed as a modern city, constantly changing, and there was also a series of dark, narrow twisting tunnels to explore. The Minotaur itself was portrayed as a creature of nightmares, but also as a tragic, sacrificial animal - helpless against its fate despite its great strength.

The exhibits were challenging and shocking; many were surreal and thought-provoking; some were beautiful and unearthly. I don't think many people would want to live with these works of art in their homes - but I suspect quite a few of those who went to see The Minotaur will now be seeing them in their dreams.
The Minotaur art exhibition is now over, but you can find out more about it at http://theminotaur.co.uk/ You can also buy prints from the show at The Outsiders online art store: http://www.theoutsiders.net/
The book On Monsters - An Unnatural History of Our Worst Fears, by Stephen T Asma, discusses the myth of the Minotaur and its psychological meanings. It has just been released in paperback by Oxford University Press and you can read my review of the hardback edition here: http://www.badwitch.co.uk/2010/01/review-on-monsters-history-of-our-fears.html 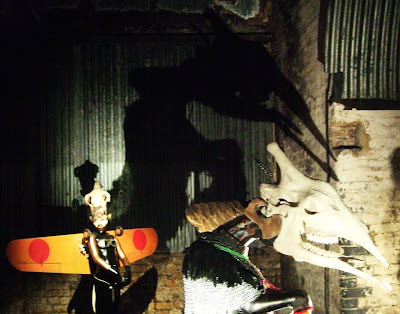