Questing for the Northern Lights 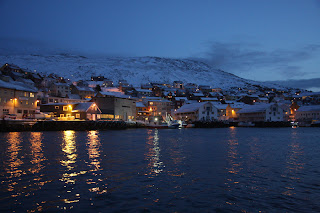 For the next week, I'm on holiday. But that doesn't mean I'll stop blogging - unless I can't find any internet connection, which is a possibility because I'm in the frozen north, in Norway, in search of the Northern Lights.

The photo above shows Honningsvag, where I was yesterday afternoon. Darkness falls before 2pm in the afternoon up here and the further I get into the Arctic circle, the less daylight there will be.

Later that evening, on board the ship I am taking up the coast, I caught my first glimpse of the lights - you can see a photo I took below. It is a bit blurry - I hope I'll get better pictures later on. The photo after that shows Finnkjerka, which are cliff-edge rocks sacred to the Sami people. Again the photos are blurry, despite being illumated at night, but to me they do look just a bit like images of the God and Goddess. 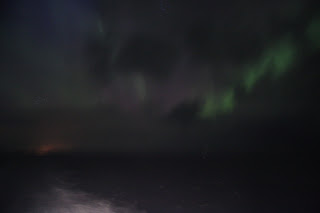 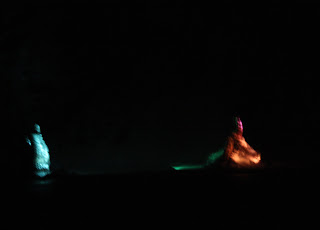 Looks awesome- I'm super impressed you are realising one of your goals so early in the year! Have a lovely holiday.

This time of year is best to see the Northern Lights, that was why I booked up so early on!