The Mystery of the Cloven Hoof 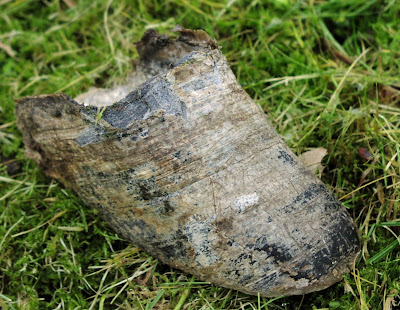 I've got a bit of a mystery. While cutting the grass the other day, I nearly broke the blades of my lawnmower when I ran over the thing in the photos.

I'm no expert, but it looks to me like half a cloven hoof - about the size of a goat's hoof and well gnawed by some animal. How half a goat's hoof could get into a suburban London garden I have no idea. 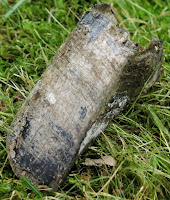 My husband suggested that perhaps the Sydenham Panther (a legendary beast of South London) had been out hunting. I accept that a genuine big cat might be able to hunt a goat - but this isn't the countryside; we don't get many goats around here. My husband then suggested that perhaps it wasn't a goat at all - perhaps the Sydenham Panther had fought a mighty battle with some cloven-hoofed devil and bitten off its foot.

A nice urban myth could be in the making. But I'm still puzzled as to how the cloven hoof got there.
Posted by Badwitch at 08:00

When the victorians were expanding London vast amounts of soil were brought in from rural Middlesex, Surrey and Essex to be used as top soil (London natural soil is either ashy [courtesy of Boudicca] or heavy clay). Loads of stuff, roman remains, paleolithic axe heads,human remains and animal bones etc... were brought in with it, this was then distributed all over London. The same thing happened all over the country-that seems the most likely explanation

Hidden Eyes - I didn't know that. Thanks for mentioning it - I'll look out more carefully when I'm doing the gardening in future!