TV - Catching up on Orbit 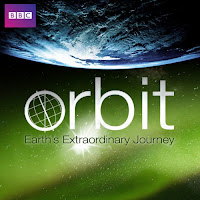 I'm a bit late blogging about this, but Orbit - a BBC documentary series about the Earth's journey around the sun - is definitely worth watching. If you are pagan and celebrate the changing seasons then this programme shows exactly what happens from the Summer Solstice through to the Autumn Equinox on to the Winter Solstice then to the Spring Equinox and back to mid summer.

In the last episode of the three-part series, presenter Kate Humble travelled to the ancient Mayan city of Chichen Itza on the Spring Equinox to watch the appearance of the feathered-serpent god Kukulcan. This is an effect caused by the sun casting shadows down the side of the enormous pyramid that looks like a serpent wriggling down the staircase.

What I liked about Orbit was that although it was primarily a science programme, it also showed people honouring the sun and the turning of the year through events such as the one at Chichen Itza. The sun and the way that the Earth moves around it affects everything on this planet. That is awe-inspiring and worthy of respect.

can be ordered through Amazon