TV: Divine Women - When God Was a Girl 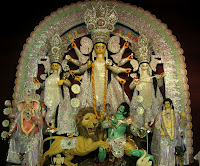 There's a new documentary series about goddesses starting tomorrow evening on BBC 2. The TV series is called Divine Women and the first episode is entitled When God was a Girl

In the documentary, historian Bettany Hughes visits the world's oldest religious site to examine evidence that women were highly important at the start of organised religion.

According to the write-up on the BBC website, Bettany Hughes looks at a time in which goddesses ruled the heavens and earth and reveals why our ancestors thought of the divine as female. Travelling across the Mediterranean and the Near East, Bettany Hughes goes to remote places to encounter the goddesses who controlled life and death. She ends up in modern day India, where the goddess is still a powerful force for thousands of Hindus. The write-up also says that she visits the Durga Puja festival to experiences goddess worship and finds out what the goddess means to her devotees.

From this, I'm assuming this first episode looks at Kali, the Hindu goddess of time and death, and Durga, whose name means "the invincible".

Divine Women - When God Was a Girl is on BBC Two on Wednesday 11 April at 9pm and the series continues the following Wednesday. Bettany Hughes is also the author of the book Helen of Troy: Goddess, Princess, Whore.

The photo at the top shows a statue of Durga