An Evening of Fairy Tales and Visionary Fairy Art 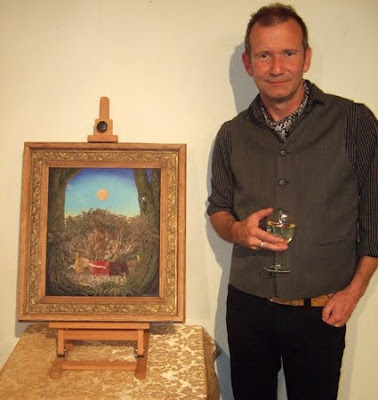 Last Wednesday I enjoyed a double bill of fairies. First, I went to a talk on The Americanization of the Grimms' Fairy Tales by Professor Jack Zipes, then I went to a viewing of the visionary fairy paintings of Sean Jefferson (pictured above) and a launch party for his book new, Greater Nature. Both events were really enjoyable.

is possibly the best around .

Professor Zipes talked about the history of the classic fairy tales. The Brothers Grimm were German academics who collected the traditional folk stories. These had been part of an oral tradition that had been enjoyed by people of all ages for centuries.

When they were later translated into English, they were sanitised and adapted as stories for children. It was because of this that they came to be thought of as only suitable for kids. In America, they were adapted even more, both as tales in books and as movies and cartoons. Most of the Disney and other movie company adaptations have very little resemblance to the original tales. Up until recently many were saccharine sweet, with all the sex and violent deaths removed. Current American trends, however, often try to change the roles of female characters such as Snow White from victims in need of rescue into warriors wielding swords.

Professor Zipes felt that there was a danger that the stories of the original folk tradition would be lost completely to American and British audiences, which would be sad. However, books such as his own translation (pictured top right) do their bit to keep the old tales alive. 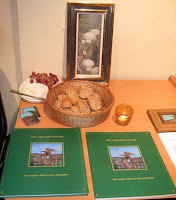 Immediately after the talk on fairy tales and just down the road from the Warburg Institute, at Treadwell's bookshop, was the launch party for Greater Nature: The Faerie Vision of Sean Jefferson (which you can see on the table in the picture left below the bread, cheese and painting).

The event was a real eye-opener for me. I had been totally unaware of Sean Jefferson's work before that evening and only really decided to get a ticket for the Greater Nature book launch and art show because I was already going to the earlier talk on fairy tales. The moment I saw Sean's pictures, I was captivated.

I have long been a fan of the fairy paintings of Victorian artist Richard Dadd - and Sean's visionary pictures can only be inspired by the same fairies. Sean describes himself as a visionary artist. He said that when he works he is definitely channelling something. 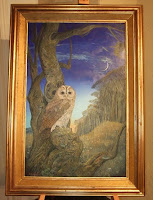 Sean was born near Bexleyheath, in Kent. Although he studied science at university, since his teens he had also been fascinated by the world of the magic.

Bexleyheath library in the late 1970s apparently had an excellent collection of occult books on its shelves, including works by Aleister Crowley, material on the Qabalah and John Dee and even the grimoire The Book of the Sacred Magic of Abra-Melin the Mage.

Sean said that since his late teens he had often also fallen into alternate states of consciousness and later joined a group of spiritualists where he learned to use that ability properly.

Sean said: "I got interested in science to find the truth about things, but in science there are always still questions. I wanted to find insight within my lifetime and science just didn't deliver." So, he decided instead to use his visionary talents to paint what he saw in alternate states of consciousness.

"Unlike John Dee, I see fairies rather than angels," he said.

You can see photos of Sean's paintings above and below, but they really don't do justice to the real thing. You can see some of his paintings at Clerkenwell Fine Art or you can buy Greater Nature: The Faerie Vision of Sean Jefferson from Treadwell's bookshop. 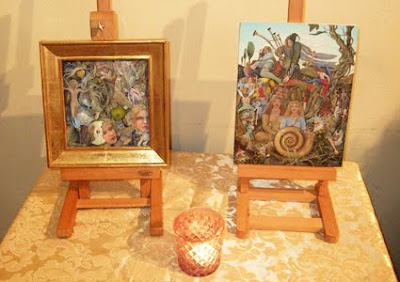 I was always brought up not to use the "F" word. We always referred to them by other names because my tutors/elders/instructors said the Little Folk would be offended otherwise.