An Appointment with Beelzebub and the Beast 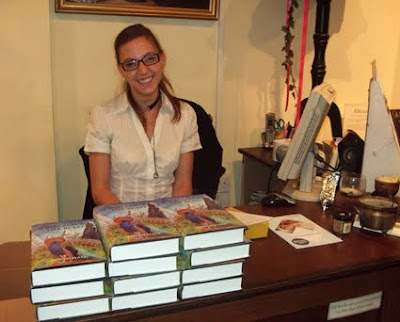 When a witch has an appointment with Beelzebub and the Beast, it doesn't do to miss it. Mind you, last Saturday was so sunny after weeks of rain, I was a little tempted forget my invitation and instead spend the day tidying my overgrown garden.

Beelzebub and the Beast isn't actually as sensationalist as the name suggests. It is the title of a book by the late David Hall that has just published by Starfire, and which was being officially launched at Treadwell's bookshop. David Hall was something of an expert on the teachings of spiritual gurus G Guirdjieff and Aleister Crowley, and his book is a comparison of the two men and their teachings.

Guirdjieff gained the name Beelzebub because of the title of his own book, Beelzebub's Tales to His Grandson,

a cosmological allegory in which Beelzebub, the ruler of a distant planet, looks at life on Earth. Aleister Crowley was nicknamed The Beast by his own mother when he had been a naughty little boy. Liking the moniker, he kept it.

The Treadwell's launch day for Beelzebub and the Beast consisted of a programme of free talks followed by a party. I didn't know that much about Guirdjieff. I had read a little about him in Three Dangerous Magi, another comparison of the two teachers, and was interested to learn more.

There were four talks during the launch event. The first three were by Michael Stanley, Roy Sutherland, Mike Magee, who had known the author when he was alive and were also knowledgeable on the subjects of Crowley and Guirdjieff. The final talk was by Alistair Coombs, who wrote the foreword to the Beelzebub and the Beast.

What I learnt was that although the teachings of Crowley and Guirdjieff were not that similar on the surface, both men felt it was necessary for humans to waken from their normal state of existence. This could be done using sex, drugs and occult rituals in Crowley's Thelema, but Guirdjieff taught techniques intended to increase the attention span.

Guirdjieff believed that humans normally spend most of their time in reflection - thinking about stuff they aren't actually involved in at that moment, such as planning supper or simply daydreaming. In this state, he felt that humans are essentially automata, that emotions, imagination and anything to do with personality are merely conditioned responses. He believed our feeling of having free will is an illusion. To my mind, this seems rather the same as the point of view put forward by behaviourist psychologists.

However, Guirdjieff thought that it was possible to overcome conditioning and to discover our true essence - to wake up. He devised a system to achieve this whereby people spent long periods of time doing very simple tasks while exercising extreme attention to detail. Michael Stanley, who had practised Guirdjieff's techniques, vouched that they work.

I don't think I'll be trying Guirdjieff's methods myself any time soon - I'm more into Jungian spirituality than behaviourism - but I would be interested in reading Beelzebub and the Beast to find out more about the two fascinating, if crazy, gurus and their ideas.

And I certainly don't regret going to the talks, even if the rain is once more pouring down and I missed the last chance in autumn to tackle my garden.

Beelzebub and the Beast can be bought at Treadwells, in London, or ordered through Starfire Publishing.

The photo at the top shows Treadwells' Livia selling copies of the book in the shop. The smaller pic shows the book's front cover.