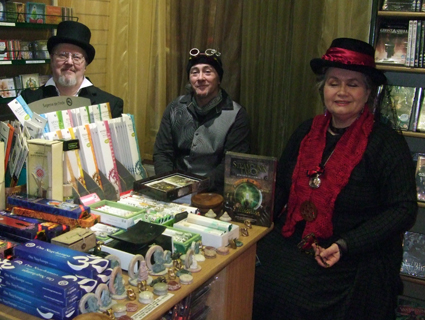 Last night I was at the launch of The Steampunk Tarot: Wisdom From The Gods of the Machine at London's Watkins Books.

The creators of  the new Steampunk Tarot,  John and Caitlin Matthews and Wil Kinghan, were there dressed as their steampunk alter egos Major Jack Squares, Madame Hypatia Tetraktys and the artificer 124C (pictured above). Everyone who attended was also encouraged to come in steampunk attire, with prizes being offered for the best - you can  see the line-up of winners in the picture below.

John, Caitlin and Wil gave a fascinating talk about the Gods of the Machine tarot and the origins of steampunk, a literary and fashion trend inspired by ideas of what a Victorian or Edwardian alternative future might be like, typified by weird steam-driven feats of engineering.

The tarot cards, the creators explained, are not intended to be Rider-Waite clones, neither are they a fluffy New Age deck. Instead they are a new imagining of the tarot, inspired by a fantastical world that is dark and dangerous, yet also full of a spirit of adventure and an underlying optimism that even seemingly impossible problems can be solved with enough bravery and ingenuity.

After the talk there was a chance to buy copies of the deck and get them signed, followed by the judging of the costume contest and a chance to mingle and chat. It was a fun evening and a great chance to learn more about this exciting new deck.

I'll be posting a full review of The Steampunk Tarot: Wisdom From The Gods of the Machine on A Bad Witch's Blog next week.

The Steampunk Tarot: Wisdom From The Gods of the Machine is published by Connections, which also produces The Wildwood Tarot 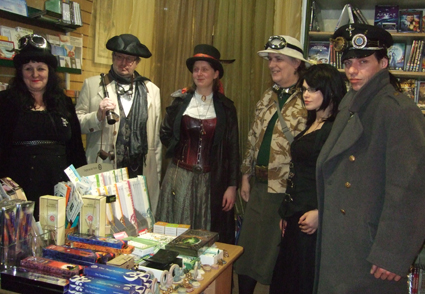