While browsing the charity shops during a lunch hour I saw the Cat Wisdom boxed set and cards. Being a cat lover, a tarot deck collector and bargain hunter, I had to buy it. Well, it was only a couple of quid.

The boxed set consists of a booklet and 45 cards with adorable pictures of cats on them. Just the thing to cheer you up if you are feeling down, even if you aren't really into finding meanings from divination cards.

the messages are generally positive ones, with a dollop of common sense advice. Trust (the card at the top left), for instance, says that if you are torn about which path to take, make a decision and trust that even though there will be challenges, "whichever one you choose will the be right one for you". 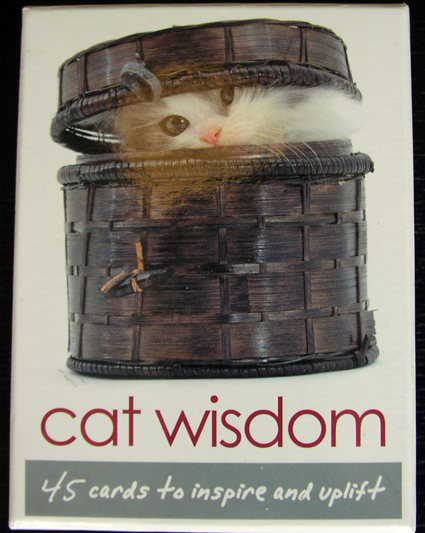 The instructions that come with the oracle set are about the simplest I've ever seen. Just pick a card for the day, or a ask a question and then pick a card. There are simple phrases on the cards themselves, then a short but slightly more detailed meaning in the book.

The cards also seem to be colour-coded, but the book didn't seem to explain what the coding meant. It could be that I've got an early edition of the set, as the one I saw for sale on Amazon has a different picture on the box. Perhaps the newer edition does say what the colours are all about, or doesn't even have the coloured dots at the bottom - I don't think that matters too much though. The pretty pictures of kittens are what's really important with this deck.

Cat Wisdom is published by Blue Angel Gallery, which produces a lot of really lovely divination card sets including the Messenger Oracle, which I reviewed a little while ago.