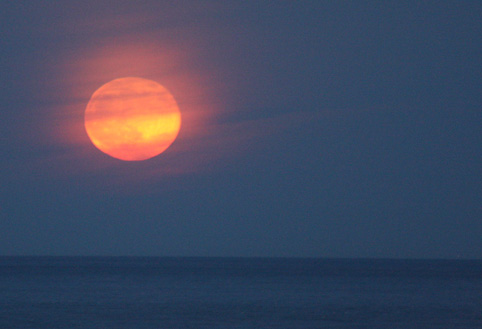 I've just received this press release from the PR department at Russell Grant Astrology Limited and couldn't resist posting it on A Bad Witch's Blog:

Be sure to watch out for the extra large full moon on the 23rd June as this will also be the moon’s closest encounter with the Earth in 2013. The moon will not be as close to the Earth again until August 2014.

According to the astrologer Richard Nolle (who coined the term ‘Supermoon’) the Supermoon can trigger a list of natural disasters including tsunamis, severe storms, extreme coastal tides, Earthquakes and volcanic eruptions. To support his hypothesis, Richard Noelle has highlighted a number of natural disasters occurring around the time of a Supermoon. For example according to Noelle, the Supermoon that occurred in February 2011 is responsible for the Earthquake that struck New Zealand on the 22nd February of that year. Other disasters occurring around the time of a Supermoon include: the hurricane and tidal surge that struck Texas in September 1900, the Hawke’s Bay Earthquake in February 1931, the New England hurricane in 1938, Cyclone Tracy in Australia in 1974, Mount Pinatubo eruption in June 1991, Hurricane Katrina in 2005 and the 2005 Tsunami in Indonesia. All these happened within days and at a maximum of two weeks of a Supermoon.

Although scientists dispute the theory and astronomers point out that any gravitational effects typically happen within three days of a Supermoon, Richard Noelle suggests the timespan can be longer. According to his theory, the Earth seems to be more exposed to natural disasters within seven to fourteen days before and after a Supermoon or at the time of the Supermoon itself.

Astronomers refer to it as a perigee full moon, ‘perigee’ describing the moon’s closest point to the Earth in a given orbit but in recent years the term Supermoon has been more commonly used to describe the time when the moon’s orbit is closest to Earth and the sun, moon and Earth are all in alignment.

Was it mere coincidence that the earthquake and tsunami that struck Japan in March 2011 occurred within ten days of a Supermoon? Apparently there is a small correlation between new and full moons and seismic activity because tidal forces are stronger than usual due to the alignment of the sun and moon. This puts additional stress on tectonic plates but scientists assert that the moon cannot cause a geological event like an earthquake although it can cause a difference to the tide.

Astrologically the Full Moon’s links with Pluto and Jupiter suggest a time of extreme emotional reactions to religious and cultural issues. The Supermoon challenges us to pay heed to our heads and not our hearts. We should not exclude emotions entirely but we should rely more on logic in important decision-making.

Whether Supermoons can trigger natural disasters, scientists and astrologers differ in their response. What’s definite is that this year’s largest and closest Supermoon will occur on June 23rd, so weather permitting, be sure not to miss one of the year’s most magical cosmic moments.

I've also been told that if I use the press release on my blog I must be credit: http://www.russellgrant.com/

The photo was taken by myself, the Bad Witch, during last month's full moon.
Posted by Badwitch at 16:52