According to a press release I've just received from the office of celebrity astrologer Nicolas Aujula, the royal baby will "enjoy combat and marry a foreigner". To be honest, I suspect that is quite likely considering that many princes in the past have joined the armed forces and married foreign princesses. Here is the rest of the press release: 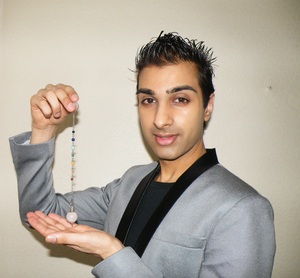 Born at St Mary's hospital in Paddington, London at 4.24pm on 22nd July 2013, the monarch in waiting becomes the third in line to the throne. Had he been born 30 minutes later the future King would have been a Leo.

Born with four planets (the Sun, Mercury, Mars and Jupiter) in the sign of Cancer and Scorpio Rising, gives the new arrival a highly watery personality that will easily relate to people through a caring and compassionate nature - the public will simply adore him. Later on this can easily transcend into pursuing charitable efforts, just like his late grandmother Princess Diana.

The Prince will be sentimental, intuitive, family orientated and protective to those he cares about, ensuring a strong nurturing bond between mother and child. Other notable Cancerian public figures include Nelson Mandela, Tom Hanks, Tom Cruise and Cheryl Cole.

The Royal Baby would be no stranger to combat and the armed forces could be off interest that he follows in the footsteps off uncle Prince Harry who was part of Army deployments in Afghanistan. At birth Mars, the war planet was conjunct expansive Jupiter that enlarges the traits off any planet it touches - highlighting that the future monarch will exemplify strong Martian solider-like qualities.

The 'Beverly Hills Times' Astrologer further adds: “The prince will display a wilful, adventurous and go-getting spirit that loves the outdoors, sports and adrenaline pumping activities. He'll be fearless and no stranger to fighting for what he believes in, expect to see a head-strong and fiery individual taking centre stage”.

Glimpsing into his future love life, Nicolas Aujula has a revelation “His Venus indicates marriage to a foreigner or someone with a cultural difference that may surprise his family and the public in years to come. Like fellow Cancerian King Edward VIII who abdicated the throne in 1936 when he married American divorcee Wallace Simpson - could there be parallels?”
Posted by Badwitch at 16:30

Interesting, he's not the only astrologer who thinks he may marry a foreigner. See Marjorie Orr's blog and page down for the HRH Junior posts.