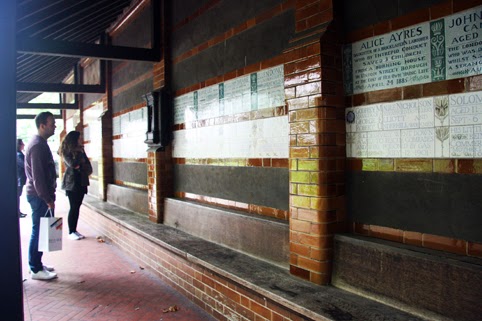 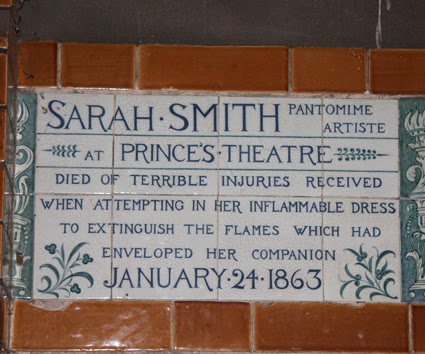 Postmen might be newsworthy at the moment with the privatisation of the Royal Mail and threatened strike action over pay, but here are some photos showing a different view of postmen - and heroes from the past.

Postman's Park, just north of St Paul's Cathedral in the City of London, is so named because it was popular with postmen who worked at the nearby former GPO headquarters. It is still a lovely, secluded public garden that is enjoyed by city workers in their lunchtimes, but it is also famous for the memorial to heroic self sacrifice that lies along one side of the park. This memorial is to ordinary people who died while saving the lives of others and who might otherwise be forgotten. They are commemorated with ceramic tiles displaying their names and heroic deeds, under a wooden colonnade.

This was built in 1900 by the artist George Frederic Watts and is known as the George Frederic Watts' Memorial to Heroic Self Sacrifice. He was a great advocate of art as a force for social change. He first wanted the memorial to be a national monument and wrote to The Times, describing the case of Alice Ayres: "a maid of all work at an oilmonger's in Gravel Lane who lost her life [in 1885] saving the lives of her master's children."

The government not being interested, he funded the memorial himself. His wife, Mary Watts, took over the management of the project after his death in 1904. The tiles are deeply moving and inspiring, as you can see from the examples I've photographed and posted here. In 1972 the Memorial to Heroic Self Sacrifice was grade II listed to preserve it.

Postman's Park is also bordered by rows and rows of tombstones. These are the remains of graves that once stood on the site before the park opened in 1880. The lovely gardens and memorial were once the burial grounds of St Botolph's Aldersgate church, Christ Church Greyfriars and St Leonard, Foster Lane.

You can take a walk through the City of London that includes Postman's Park - and learn more about the memorial - with the book London's Hidden Walks. 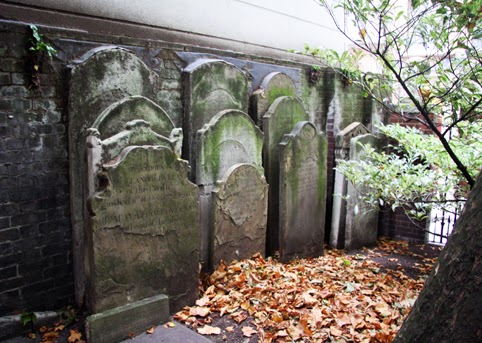