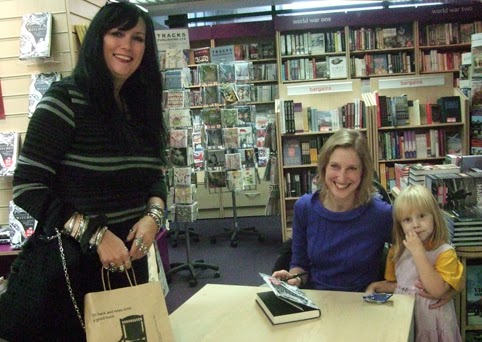 Tracy Borman – who works with Lucy Worsley as a curator at the Historic Royal Palaces – has just published a book called Witches: A Tale of Sorcery, Scandal and Seduction.

I was lucky enough to get a ticket to hear her give a talk about it at the National Archives, in Kew, last week.

She began by saying how important archives are for historians and also for writers. She said her own book was rooted in material found in the archives in Leicester. The popular image of a witch as being an old woman wearing black with a pointy hat, a broomstick and a cat is not a modern invention – we know, because there is a 15th century picture of a witch looking just like that. It means we have envisaged witches looking that way for hundreds of years.

Archives also show us there have been witches since records began. The big difference is that up until the late 15th there were more good witches than bad witches. These white witches were mostly known as cunning folk or wise women. They cured the sick, found lost property and did fortune telling. There were also always the opposite – maleficent witches, or black witches, who caused harm – but they were rare before the 15th century.

Traditionally, a witch would stand out from her community. She would be poor, live at the edge of the village, be old – which then meant over 40, be unmarried or a widow, own a cat and have moles on her skin – “the Devil’s marks”. It was said that witches could feel no pain through those marks, so those hunting for witches would use “witch-prickers” to test them. It was easy to be on the wrong side of an accusation, and most accusations led inexorably to conviction and execution. On the rare occasion when one was acquitted, they would still live the rest of their life under a cloud of vilification and many were murdered.

Tracy said records show that, from 1450 to 1750, 100,000 people were convicted of witchcraft and 40,000 executed. Many records were destroyed in the 18th century, so the real number could have been in the millions rather than hundreds of thousands. In England, witches were hanged rather than burnt as they were in Scotland or other parts of Europe.

covers a case from the early 17th century – a time when England was cooling off from persecutions. Elizabeth I was, in general, rather pro witchcraft and matters of magic. She even employed a court astrologer, John Dee. But King James of Scotland was a keen witch hunter.

He had been raised to believe that women were evil, but also believed witches had called up a tempest to destroy his fleet and that he himself had been lucky to survive. The ringleader was thought to be the wise woman Agnes Sampson, who shocked King James by knowing the words he had whispered to his wife on their wedding night. So convinced he was, he sent Agnes to be burnt alive. He went on to write a manual of witchhunting, Demonology.

When he became King of England, witchhunting was back in vogue.

Tracy Borman’s book, however, is not just about the history of witchcraft in general. It focuses on one case that happened in Leicester in which three women were accused of causing the Earl of Rutland’s sons to fall ill and die.

I’m not going to go into that story here. I have got a copy of Tracy’s book and am very much looking forward to reading it. When I’ve done that I’ll be posting a review on my blog.

The photo above shows, from left, a witchy friend of mine getting a copy of the book autographed, Tracy Borman and her daughter.

Links:
http://www.nationalarchives.gov.uk/
Witches: A Tale of Sorcery, Scandal and Seduction