Pictures from Ghouls' Night Out - Oneiromancy 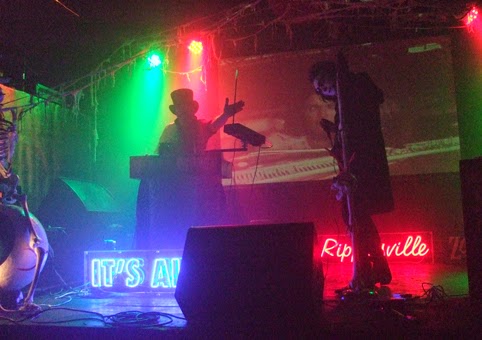 At my age, if I'm going to have a boozy late night at a goth gig, I have to accept I'll feel more like a zombie than a witty witch the next morning. But Ghouls’ Night Out at the Lexington, Angel, last Sunday evening was worth suffering the hangover for on the Monday commute to work.

Ghouls’ Night Out is a bi-monthly cabaret club of comedy, film, talks and live music. Each evening is hosted by occult comedian Andrew O’Neill and has a different theme. The one on 6 April was all about Oneiromancy, which technically means divination by dreams, and delved into the stuff of nightmares. It was great and I hope the pictures I took capture some of the atmosphere. 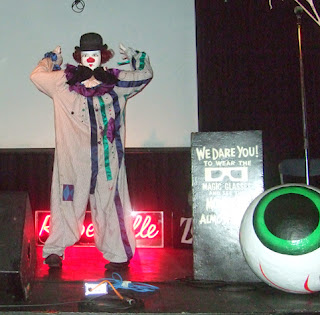 At the top you can see Vince Ripper and the Rodent Show, a horror band featuring Ratfink of Alien Sex Fiend. Top right is Andrew O’Neill (that's the guy in the high heels and succubus wings, not the skeleton on a giant eye). Left is Dott Cotton, the scary clown. Below right is another photo of the band's performance and at the bottom is poet and puppeteer Mary Beth Morossa. 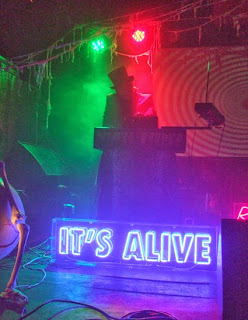 Back in February I went to an earlier Ghouls’ Night Out, on the subject of British occultism in the 1970s. That featured more of Andrew O'Neill's comedy act, talks on Satanism in rock music and religion in horror movies as well as a film from 1971 called The Power of the Witch. I failed to blog about it back then, although I intended to. Hopefully this post makes up for that - and I do recommend trying to get to the next one, even if you do have work the next day.

Ghouls’ Night Out takes place on the first Sunday of every other month at The Lexington, 96-98 Pentonville Road, London, N1 9JB, and the next event will be in June. The theme will be 80s sci-fi horror. To find out more, visit http://www.ghoulsnightout.co.uk/ 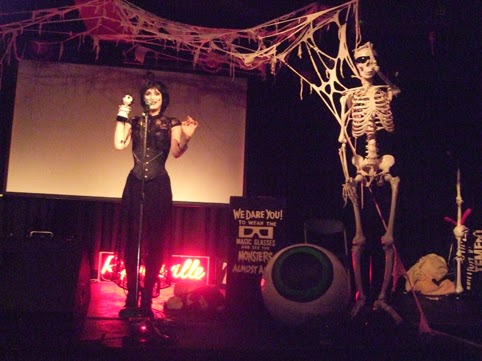 It certainly was a truly fab night out! Can't wait for the next one in June :-)