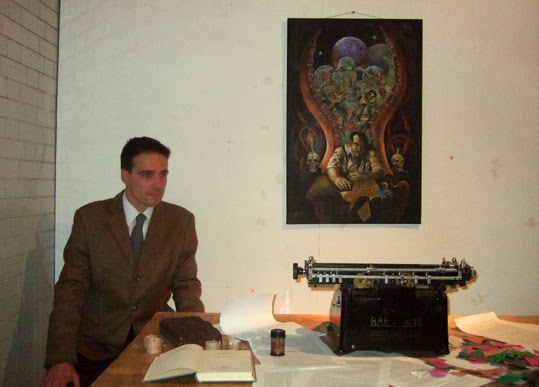 and live in London then you won't want to miss Father Dagon, a play at The Rag Factory, off Brick Lane, until Saturday night. The company performing it, Dread Falls Theatre describes Father Dagon as "combining actors, dancers, musicians and visual artists to create a world in which roaming audiences experience H.P. Lovecraft’s fiction."

I went to see Father Dagon on Wednesday and thought it was so brilliant I couldn't stop thinking about it afterwards. So much so that at night I dreamt I was a cultist who summoned the sea god Dagon to eat all the people who are annoying me at the moment. A highly satisfying dream, although no doubt one I ought to feel more guilty about enjoying so much :)

Dreams in fact form an important part of the play, and the whole thing - conducted in perambulatory theatre style - is like some recurring nightmare from the head of HP Lovecraft. The photo at the top shows the first scene in the drama - the horror author himself in his study, talking about his inspiration for his stories.

I don't want to give away too many spoilers though, as this is a play that needs to be experienced fresh.

Father Dagon is on until 30 August at the Rag Factory; 16-18 Heneage Street, London E1 5LJ. Start times at 7pm and 9.15pm. Tickets £15/£10 from: http://www.skiddle.com/groups/dreadfallstheatre/events.html