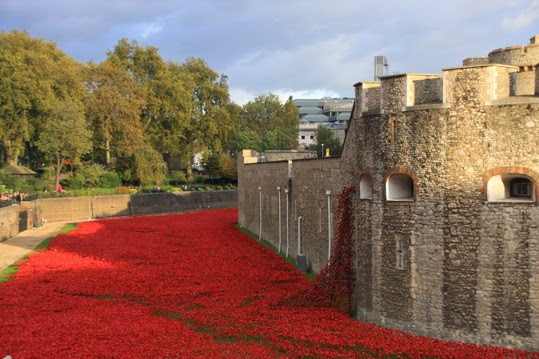 One of the must-see sights in London this summer and autumn has been the art installation of poppies surrounding the Tower of London. Here are a few photos I took when I visited a few weeks ago.

Called Blood Swept Lands and Seas of Red, the art installation marks the centenary of the first full day of Britain's involvement in the First World War. It was created by ceramic artist Paul Cummins and stage designer Tom Piper. Since early august, 888,246 ceramic poppies have gradually filled the Tower's moat - each poppy representing a British military death during the war. The display runs for just a few days more - until 11 November, which is Armistice Day, Remembrance Day or Poppy Day.

During the First World War, on the 11th hour of the 11th day of the 11th month in 1918, the guns of the Western Front fell silent after more than four years of war. People in the UK observe a two-minute silence at 11am on 11 November, and also remember the war dead on Remembrance Sunday, the Sunday nearest to 11 November, which this year falls on 9 November - this Sunday.

The display of poppies at the Tower of London is intended as a place for people of all faiths and none to go to remember to honour the war dead. If you haven't visited yet, there is still a little time. You can find out more about Blood Swept Lands and Seas of Red here http://poppies.hrp.org.uk/ and this website gives more information about Remembrance Day: http://www.visitlondon.com/things-to-do/event/7152413-remembrance-in-london 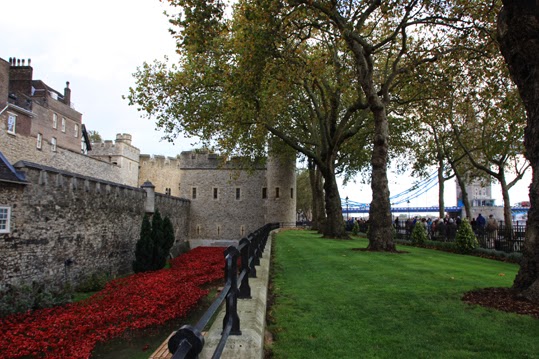