Free Book: The Common Book of Witchcraft and Wicca 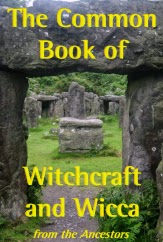 It might be slightly late for a Yule gift, but better late than never. Here is a press release from publisher Eschaton Books including links to get a free download of a book called The Common Book of Witchcraft and Wicca. Here is what the press release said:


This holiday season was marked by the release of a unique new book: The Common Book of Witchcraft and Wicca. The book, dealing with magic and spirituality for the modern Witch, is highly unusual not only in being offered free of charge but also in being published under a creative commons license that allows people to share and republish its contents without having to worry about copyright issues. The book is available as a free pdf download directly at http://goo.gl/9L9HdT or through the publisher's site at http://bit.ly/tcbowaw.

“The book is a gift,” said Rev. Don Lewis, a Wiccan Arch Priest and one of the authors featured in the Common Book, “it is freely given to all, to use as they see fit. All of the contributors have given their work, without limitation, as an act of love toward the world. The work is meant to used, meant to be shared.”

“The Common Book of Witchcraft and Wicca” includes a total of 400 pages of articles, chants, and poems dealing with Witchcraft and Wiccan spirituality, ranging from creation and the nature of the soul to magical manipulation of time. There are also biographies of famous Witches and Pagans from history.

Authors featured in the Common Book include Pagan luminaries such as Oberon Zell-Ravenheart of the Church of All Worlds and the Grey School of Wizardry, Rev. Don Lewis of the Correllian Nativist Tradition of Wicca, Abby Willowroot of Spiral Goddess Grove, Raven Digitalis, Arch Priestess Stephanie Leon Neal, Alan Salmi, and A. C. Fisher-Aldag, among others.

“Of course it's controversial – it's about major social change. We live in a time of great unrest. People are marching in the streets. The whole world's on fire. Old answers aren't working any more. Old religions aren't working any more. The world needs new answers and new ways of thinking. The old religions are drowning in blood and war and killing the earth as they kill themselves. Only a new religion, only a new way of seeing the world and interacting with it, can save the future for our children. That is what 'The Common Book of Witchcraft and Wicca' is about.”

I have downloaded a pdf of the book for myself, but not had a chance to read it yet. I'm looking forward to doing so though.
Posted by Badwitch at 09:48