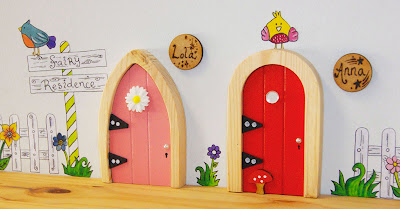 
Following the news that Wayford Woods in Somerset is to begin removing some fairy doors from its grounds, The Irish Fairy Door Company has brought forward its expansion into the UK in order to prevent a rapid rise in fairy homelessness.

As director Niamh Sherwin Barry, explains, “Removing fairy doors from the woods needlessly casts fairies out of their homes, whilst also spoiling the magic and belief for those who visit them to leave gifts or letters. Everyone at Fairy HQ was hugely disappointed to hear of the potential evictions and we received an overwhelming number of messages from worried adults and children across the UK, expressing concern and offering human homes to the newly-homeless fairies.”

The company has already housed more than 150,000 fairies worldwide since its inception just 18 months ago and is now coming to UK shores to ensure no fairies are left out in the cold.

Created by life-long friends Niamh Sherwin Barry and Aoife Lawler, along with their husbands Oisin and Gavin, The Irish Fairy Door Company helps fairies relocate into homes, classrooms, gardens and woods by creating beautiful, high quality, handmade Irish fairy doors which can be installed almost anywhere. Once in place, the creative team at Fairy HQ ensures direct access to Fairy Valley so the magic continues long after the fairy has moved in, with ongoing magical messages, play ideas and stories delivered to children and parents who register their fairy, via Magical Matters on the website.

Niamh Sherwin Barry continues, “We have already housed a number of fairies in the UK, mainly within the family home, but we’re aware that many in the fairy community favour the great outdoors. These woodland fairies prefer a home amongst the trees.

“Tellingly, many of the people who’ve contacted us share our own concern about the wider impact of removing fairy doors from the woods – the dampening of creativity, belief and magic, all of which we feel are intrinsic in childhood and beyond. Installing a fairy door for your child opens up a whole new world of magic, broadening their imagination and creating a beautiful and unique way for adult and child to interact.”

Niamh also receives regular updates from the fairies themselves via Kate, Queen of the Fairies, and the National Fairy Council, who released this official statement regarding the situation in Somerset:

“In light of today’s news from Somerset, the Fairy Council would like to reassure fairies in the UK that they will be monitoring the situation closely. Although we do welcome a certain level of quality control so that all fairies have wonderful and magical homes to live in, we will be working hard to ensure that no fairies are left homeless by the actions of the Fairy Control unit operating in Wayford Woods. Indeed, we’ve now stepped up our activity in the UK and are currently busy installing new handmade, wooden Irish Fairy Doors throughout the country to ensure that any fairies who do find themselves unfairly evicted have a safe new home to move into. We hope that the people of Somerset and indeed the rest of the UK continue to create beautiful and enchanting homes for our fairies. We’d also like to take the opportunity to advise Mr Acreman of the Fairy Control unit that ‘glittery stuff’ is actually fairy dust and is not in the slightest bit ‘garish’.”

For further information or to give a fairy a home, visit www.theirishfairydoorcompany.com

*applause* Give their marketing department an extra biscuit...