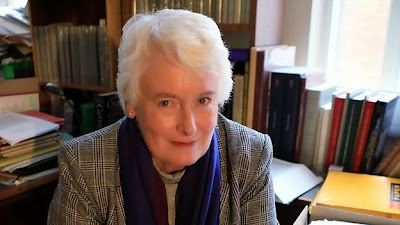 BBC Four has a documentary at 9pm tonight called Sappho: Love and Life on Lesbos.

As the description on the BBC website says, Sappho was "the most controversial writer of the ancient world and the first authentic woman's voice in western history."

In the programme, papyrus expert Margaret Mountford (pictured above) examines the evidence. The BBC description says:


A lost papyrus inspires Margaret to go on a journey of exploration. From the fragmentary documents, ruined temple architecture and surviving oriental jewellery, we conjure the real world of the woman, whose erotic writings gave us the words 'sapphic' and 'lesbian', after the island of Lesbos the place of her birth. Was Sappho indeed the first lesbian - a priestess, prostitute, stern schoolmistress or aristocratic lady of leisure, as readers over the centuries have variously alleged? Margaret looks at how each generation's view of the archetypal liberated woman of letters tells us as much about us and our fears and concerns as it does about her.

Those who went to the Pagan Federation London's Beltane ritual last week would have heard me recite one of Sapho's poems in honour of Aphrodite at the end of the rite. Here it is:


Cyprus, Paphos or Panormus
May detain thee with their splendour
Of oblations on thine altars,
O imperial Aphrodite.
Yet do thou regard, with pity
For a nameless child of passion
This small, unfrequented valley
By the sea, O sea-born mother.

Much of the poetry of Sapho is about love and about the Greek Gods - Aphrodite in particular. This documentary offers the chance to learn more about the woman behind the words.

Sappho - Love And Life On Lesbos is on Wednesday 6 May from 9pm-10pm on BBC Four. You can find out more here: http://www.bbc.co.uk/mediacentre/proginfo/2015/18/sappho-love-and-life-on-lesbos
Posted by Badwitch at 08:00