The Abbey Garden at Glastonbury Festival 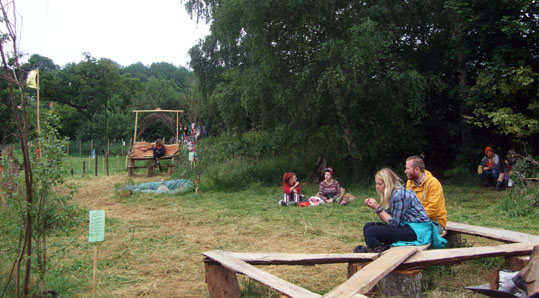 Glastonbury is not all music, dancing, crowds and other frantic entertainment, there are also spaces for quiet contemplation - which I was very grateful for, as I am not up to 24-hour partying at my age.

This beautiful garden is an area near the stone circle called the Abbey. A sign at the entrance says: "Abbeys are powerhouses of prayer and dedicated spiritual practice. They are sanctuaries for the sick, the poor and the oppressed, brimming with healing, abundance and freedom." 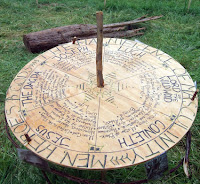 It goes on to mention Glastonbury's famous ruined abbey and says that the garden is a "first stirring of its renewal". But the garden isn't only dedicated to Christianity. You can see in the god wheel to the left the names of many deities including the Dagda, Lugh and the Lord of the Wildwood as well as Jesus. Other shrines are dedicated to female deities as well as to Mary, mother of Jesus. A majestic statue of the Angel of Remembrance offers a place to remember the ancestors too.

Benches set out in the form of a star with a fire pit in the centre forms the middle of the garden and other places to sit are spread out. Some are at shrines, some under trees and some just logs suitable for sitting on.

Glastonbury Festival is strongly associated with Glastonbury Abbey itself and in August holds a mini festival called the Abbey Extravaganza. You can find out more details of that here: http://www.glastonburyfestivals.co.uk/2015-glastonbury-abbey-extravaganza-to-be-headlined-by-ray-davies/ 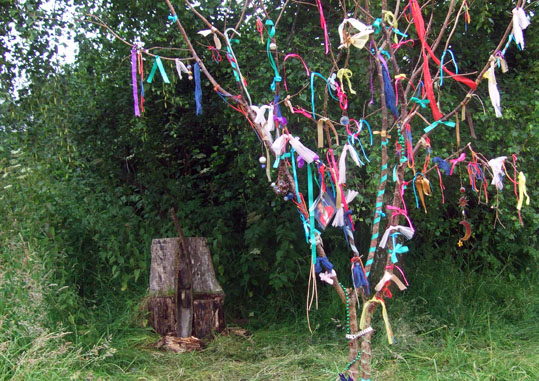