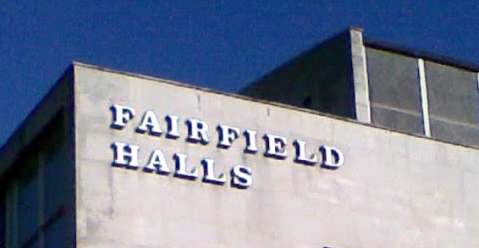 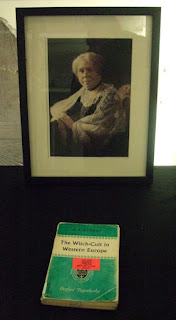 Margaret Murray and sex magic were topics that reared their heads repeatedly over the past couple of days. Not together, I hasten to add, they were two separate subjects that I heard talks on - first at London's Petrie Museum on Friday evening and then at Witchfest in Croydon on Saturday.

and The God of The Witches

in which she took evidence from witch trials to back up a theory that a pagan cult of witches had survived since Stone Age times. This without doubt influenced Gerald Gardner when he popularised the modern pagan witchcraft religion of Wicca.

Nowadays, with the evidence from the witch trials more closely examined, those persecuted are known to be mainly Christians rather than pagans, and very few were likely to have been any kind of witches at all.

For many years, Margaret Murray's whole reputation as a folklorist, historian and archaeologist suffered as a result, but sociologist Titus Hjelm explained in his talk at the Petrie Museum, of which Margaret Murray was a curator, that her work as an Egyptologist is still very highly regarded. She was an early feminist and can also be considered the Godmother of Wicca.

It is also quite possible that Margaret Murray herself was a witch - the evidence for that comes from another of her books, the autobiographical My First Hundred Years

and from accounts by others who met her when she was alive.

This was also discussed by Melissa Harrington at Witchfest as part of her talk on Wiccan Myths. And what comes out of it is that although Murray's theories on witchcraft were largely wrong, her mistakes may have come because she was personally passionate about the subject of witchcraft and the revival of pagan religions after centuries of domination by Christianity, as well as being angry at the oppressive effects of patriarchy. Those are still hot topics with witches today.

Now on to sex. That theme started in Roger Luckhurst's talk at the Petrie Museum on William Seabrook - a man with a fascination for Witchcraft

and magic - and for kinky exploits with pretty women in bondage.

At Witchfest, James Bennet gave a talk called The Magick of Sex - an at times explicit account of how sex can be used to raise energy and empower spells. Later Rufus Harrington talked on The God Pan Within, including his own explicit account of  the Great Rite. What came across from both of the Witchfest talks was that sex is something to be celebrated and, in appropriate circumstances, sex magic is extremely effective.

I always have an amazing time at Witchfest - for myself and many Wiccans it is a highlight of the year. However, this year's event could be the last at Croydon's Fairfield Halls, because there are plans for the venue to close. If so, Witchfest will have to move on. It would be the end of an era, but hopefully not the end of Witchfest

Oh, I wish I had gone to those! I'm just about to do a write up of my own experience. I'll link to it if you like. :)

Carla - Thanks. I am happy for links.

Hi my name is Jessica I'm reaching out because I would like to start studying witch craft but I need help I don't know were to start or what to do. Lately I have felt this evil spirit following me around and its making my life a living hell. I have always felt the presence of spirits around me since I was a little girl but nothing like this. I need help. And like I said I want to become a wiccan I guess u call it I really don't know. I've searched the internet for a while now trying to find someone to help me but I've had no lucky can you please help

My email is jessicalindsey0911 @gmail.com

Jessica, I wrote this blog post about finding out the basics of Wicca and witchcraft: http://www.badwitch.co.uk/2009/01/wicca-witchcraft-finding-out-basics.html


I don't know what country you are in, but if you are the UK, you should be able to find details of pagan moots and witchcraft events on the Pagan Federation website: http://www.paganfed.org/ and the Children of Artemis website http://witchcraft.org/

Thanks for the birthday reward, I really love it.