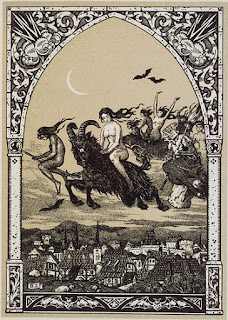 Fancy learning about the craft of the traditional village witch? Dolores Ashcroft-Nowicki is running a two-day workshop called Traditional Village Craft in London on June 25 and 26. The event covers everything from the history of witchcraft to spells and runs from 9.30am to 5.30pm each day. Here are the details from the flyer I was sent about the event:


Lodge Mercurius is proud to present a summer weekend workshop on Traditional Village Craft with Dolores.
Dolores tells us that the word 'witchcraft' has been demonised for over 2,000 years, but those who have worked with its rites and practices know the truth behind it and refer to it as The Craft of the Wise.
These practices go back to pre-Saxon Britain and were still part of country life until very recently. The ancient ways were recorded and kept under oath until the last of the Elders had passed.
As one of the last protectors of their ways and beliefs, Dolores has occasionally made this remarkable knowledge handed down to her available to those wishing to reclaim their heritage. This is such an occasion and something of a rarity. The presentation will include outdoor work (weather permitting).
Included in the workshop is:

*The witch villages of Britain: before the Norman conquest until the 1980s
*The death of the last village
*The hierarchy of the village: their customs and practices
*The village year and festivals
*Description of their ancient rites
*Families, customs and taboos
*Village belief systems and fertility
*Spellcraft
*The dancing floor and the dancer archetype
*Their chants and songs
*Songs of the walkers
*The White Lady and the Horned God
*The Moon's daughter and the Hunter
*Herne as Lord of the Wild Hunt
*The 12 full Moons and 12 dark Moons

Cost is £145 with a deposit of £75. The organisers recommend booking early as the event is likely to fill up very quickly. For more information and to reserve a place contact Maria-Teresa Harmer via
email: mariateresaharmer@yahoo.co.uk or telephone 07963428992.

Dolores Ashcroft-Nowicki is the author of many books about magic, pathworking and ritual including Magical Use of Thought Forms,

The Shining Paths: An Experience in Vision of the 32 Paths of the Tree of Life,

and The Daughters of Eve: The Magical Mysteries of Womanhood.

She also edited the acclaimed book Practical Magic and the Western Mystery Tradition: A Collection of Previously Unpublished Works Spanning the Magical Career of W.E.Butler.

Surely then, this Lady must be all of 1000 years old by now!