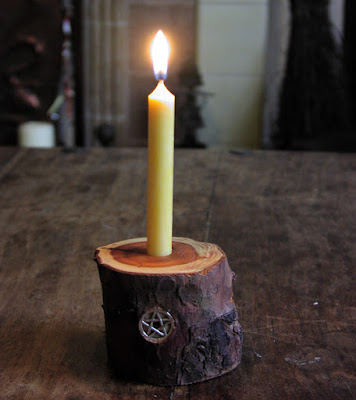 I was absolutely bowled over by this beautiful gift I was given last night at a pagan moot. It is a spell candle holder that was carved from yew wood by a friend. He made it from a yew tree branch that had been knocked down in a storm.

Witches consider yew trees to be very magical. For some, they are the God Tree - the tree of life - while for others they are connected to the Dark Goddess who brings both death and rebirth. Yew trees are poisonous and often grow on burial grounds, so are connected with death, but they are also extremely long-lived and constantly renew themselves because when a living branch touches the ground it takes root and forms a new tree.

Perhaps surprisingly, yew trees are also associated with healing and some people claim to have experienced miraculous cures after sitting beneath the branches in ancient yew groves.

This spell candle holder will be perfect for magic for healing, sending compassion to those suffering bereavement and for attempting to contact the realm of the spirits. The photo above shows a beeswax candle burning in my yew-wood holder - I hope it brings healing and renewal to those who need it.