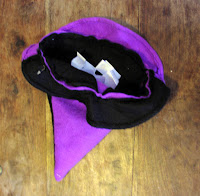 Today is Earth Day - and by chance earlier this week I rediscovered in a drawer an old witch's hat that I had used in an Earth Day ritual back in 2013.

During the ritual we all promised to be more active in helping Mother Earth and drew slips of paper from the 'sorting hat' with suggestions of things to do. The message I got told me not to buy disposable items like paper cups and plates, because reusable items are better for the environment.

At the time I blogged that I already tried to avoid disposable items, but that I did have occasional paper cups at coffee shops. I promised to make efforts to avoid that in future. I also mentioned that some coffee chains are happy to fill your own cup for you if you take one with you and some even give you a discount on the price of your drink if you bring your own mug. Worth remembering - not only on Earth Day.

How did I do with my promise?  Well, at the time I was regularly working in an office block that had a coffee bar and I got into the habit of taking an insulated mug with me and getting that filled up. I felt very proud of myself.  However, over the three years since then my habit has rather lapsed - so this was a good reminder to get back into the practice again.

For Earth Day 2016, this morning I drew another slip of paper from the hat - it said: "Save your ktichen scraps for a compost bin."  That actually is something I am pretty diligent about already. What I really ought to do is go out into the garden and use my nice home-made compost for planting a tree in, as tree planting is this year's theme.

Mind you, I did also feel reasonably proud of myself that I had kept all those slips of paper in the sorting hat. I could have thrown them away, but instead decided to keep them for future Earth Day use. There are still more in the hat, so it will get put back in the drawer and saved for next year.

I am also open to suggestions for a suitable tree to plant in a medium-sized urban back garden.