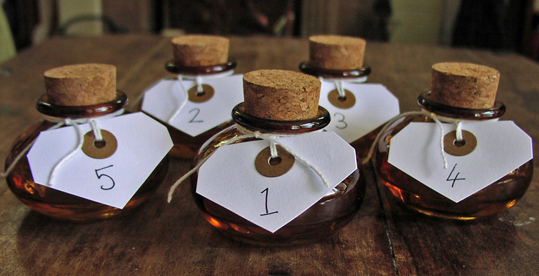 Here are five little bottles of magical goodness all ready to take to my candle magic workshop at Treadwell's this afternoon. They are bottles of scented oil. Why numbers rather than names? Well, there's a little exercise in the class on intuitive magic, so I won't be saying what's in the bottles until later in the lesson.

I was originally going to buy brown labels to go on the bottles, partly because I thought that would match the brown glass, but also I assumed they would be cheaper. I was rather surprised when I found that wasn't the case.

If you would like to book up for one of my candle magic workshops, here is the details of the one in June: http://www.badwitch.co.uk/2016/03/event-new-date-to-learn-candle-magic-at.html

You can also order copies of my book Pagan Portals - Candle Magic from Treadwell's here: http://www.treadwells-london.com/shop/candle-magic-lucya-starza/

On each Pagan Eye post, I show a photo that I find interesting, with a few words about it - a seasonal image, a pagan site, an event, or just a pretty picture. If you want to send me a photo for a Pagan Eye post, please email it to badwitch1234@gmail.com Let me know what the photo shows and whether you want your name mentioned or not. For copyright reasons, the photo must be one you have taken yourself and you must confirm that you are submitting it for A Bad Witch's Blog.