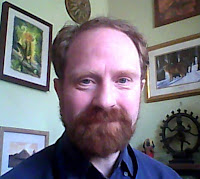 Robin Herne is a storyteller, poet and artist as well as being a teacher and a druid. I chatted to him a few days ago about stories, ghosts, festivals and the future of paganism:

Q: I know you have published quite a few books of poetry and stories and that you perform your stories live. What is your favourite part of all that? Do you prefer the creative writing and composing bit or do you prefer performing live?
RH: I love lecturing and telling stories to a live audience (having told to some dead ones, I can assure you it's no fun). Writing is a rewarding activity, combining the pleasure of imagination and research with the sheer joy of avoiding human contact whilst pretending it is for career advancement.

Q: I love the image of you in a Gothic graveyard telling tales to the ghosts of the dead (I'm hoping that's what you meant, at least). On that theme, have you ever had any spooky encounters with ghosts, or do you just put them into your stories?
RH: After many years of teaching, I have certainly had people in class who might well have been undead. That's not even counting Ofsted Inspectors. Given that ghosts don't wander around in bed sheets clanking chains, it's possible I might have seen someone who wasn't alive without actually realising it. However, I haven't seen someone I knew to be dead at the time. As a child I saw some very odd lights whilst on a camping holiday, and to this day I have no idea what they were. There are a lot of Strange Things in the world, and storytellers only inform audiences about a very small number of the Strange Things. Sometimes we also tell stories to the Strange Things about the Normals, but they rarely believe us. Storytellers are go-betweens, neither fully one thing nor another.

Q: What is your favourite pagan festival to perform at?
RH: I haven't actually been to a wide variety of gatherings. I help organise the speakers for Leaping Hare at Colchester and tell stories there too, which I enjoy. I also organise Pooka's Pageant, which I think is the only polytheist performing arts festival in the UK. The quality of talent is often impressive and the audiences enjoy my storytelling too. The Grey Mare Camp [in the New Forest] is great fun, and very laid back. The venue for the last couple of Harvest Moon gatherings, a puppet theatre in a converted old church [in Norwich] was quite surreal. I have dropped in at various other conventions around the country, but not on a regular enough basis to say much about them. Last year's set of graphically gruesome stories went down well.

Q: I understand you are going to be at the Druid Camp this summer. Is it a festival you would recommend?
RH: I've only been once previously, some years ago, so am not in a position to make pronouncements. I have several friends who are regular visitors, and they rave about it. This year I am giving a talk on divination, and will also tell stories if anyone plies me with cheap gin.

Q: I’ve been told that you have a good knowledge of languages. Which is your favourite language? How important are languages to your creative work and your storytelling?
RH: I am fascinated by the reconstructed languages of proto-Celtic and Ancient Egyptian. The latter I use in storytelling and Kemetic ritual. Whilst I am primarily a druid, as a polytheist I like to engage with deities known to a variety of cultures and language is part of that engagement. However, I keep other languages to a minimum in storytelling to avoid confusing audiences.

Q: What is your favourite of all your published books?
RH: I enjoyed writing the all, but my first foray into fiction - A Dangerous Place - was especially fun to write, because I got to experiment with lots of different styles and found out a lot about my home town whilst researching the different historical periods. My next book is on Egyptian mythology, but I hope to return to fiction after that and further explore the idea of pagan-oriented novels.

Q: Is there anything else you would like to add?
RH: Pagan religions seem to be entering an exciting phase in their revival, with some people giving attention to their socio-political impact and capacity to change wider society, others concentrating on developing cohesive theologies, or deepening academic understanding of pagan issues, yet others translating theory into activism on behalf of ecological issues, gender politics, and so forth. Too often social media conveys the impression that pagans do little beyond argue with each other, but I feel increasing optimism that there are many excellent new and long-standing projects developing out there. I hope to live long enough to see these projects come to fruition, and hopefully contribute constructively to some of them.

and A Dangerous Place.

You can book for Druid Camp, where he will be talking this August, here: http://www.druidcamp.org.uk/