Prof Jim Sharpe on Witch Hunts at Worlds of Witchcraft 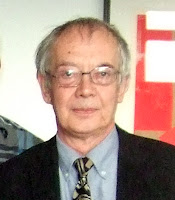 If you have ever wondered what are the key academic history books on the witch hunts in England and Europe, here is a list from a leading authority on the subject.

James (Jim) Sharpe is Professor of History at York University. He gave a talk on Interpreting the European Witch Hunts: The Last 50 Years and Future Prospects as part of Worlds of Witchcraft: Comparing African and European Histories of the Occult at Queen Mary University of London in March. On Friday I blogged about the other talks given that day – about African witchcraft beliefs. This post is a write-up of the notes I took at Professor Sharpe’s lecture, which was primarily a historiography of how the European witch hunts have been interpreted since the mid 20th century.

– it is not a very old term. However, witch hunt is a short and easy phrase and the alternative, “witch craze”, is more problematic so the former is what he used in his talk.

(1969) by Hugh Redwald Trevor-Roper. Professor Sharpe said: “I give this to my students and say read it but don’t necessarily believe it.” He added that it is a short and exciting introduction to the subject. Trevor Roper says end of the “witch craze” was to do with intellectual shifts.

After that, Alan Macfarlane wrote Witchcraft in Tudor and Stuart England: A Regional and Comparative Study.

It made use of social anthropology to study the witch hunts. Professor Sharpe said it should be read with Religion and the Decline of Magic

(1971) by Keith Thomas. Both of these books changed way people looked at witchcraft in Europe, which had previously been written off as peasant credulity. The researchers went to village level to find out what went on there, and also studied court records, assizes and ecclesiastical records. Macfarlane echoed the approach of Thomas, who was his supervisor.

Thomas was addressing anthropology as well as history, while Macfarlane discovered the European equivalent of diviners (people who used magic to discover witchcraft in Africa, as mentioned in other talks on the day). In England, these were sometimes called cunning folk. In their books, these academics developed the idea of good witches, which is now seen as a standard approach to witchcraft in early modern period.

– a model regional study, which made systematic use of court records.

Christina Larner, in Enemies of God,

looked at witch hunting in Scotland - and another model of how to examine historic witches. She researched court cases and found that Scottish witch hunts came in big crazes that can be linked to political change. This puts back into the picture the intense religiosity in the reformation and counter reformation, and the processes of state formation as well as the way legal systems operated. With this outlook: “The European witch is a transfigured figure who started in the village as enemy of neighbour and ended in courts as enemy of god.”

Christina Larner addressed the issue of gender, asking: “Why were most witches women?” She saw them as sex-related, but not sex-specific. However, American feminist author Mary Daly thought it was sex specific, and stated that in Gyn Ecology.

She looked at witch hunts as a patriarchal attempt to control women. This is not academically believed now, but was highly influential. The feminist view of witchcraft history can be traced back to Matilda Joslyn Gage’s 1893 book Woman, Church and State,

which had chapter on witchcraft and put forward the idea of 9 million witches having been killed. The figure is now thought to be much lower.

A cluster of books came out in the 1990s. Lyndal Roper’s 1994 Oedipus and the Devil: Witchcraft, Religion and Sexuality in Early Modern Europe

introduced psychoanalysis into the study of witchcraft and developed gender issues. Most accusations against women were made by women. Professor Jim Sharpe also published a book on witchcraft in 1996, entitled Instruments of Darkness: Witchcraft in England, 1550-1750.

Robin Briggs’ Witches and Neighbours: The Social and Cultural Context of European Witchcraft

was an important and well received work. Its main concern was neighbourly tensions and witch accusations, and also raised psychiatric issues. Professor Sharpe described Diana Purkiss’ The Witch in History

as “a quirky book”. He said it critiques everyone. Stuart Clark published Thinking with Demons: The Idea of Witchcraft in Early Modern Europe

in 1997, which Professor Sharpe said is "a massive work with meticulous scholarship". It established demonology as a science and revitalised the intellectual history approach.

Professor Sharpe said those are the main history books on the witch hunts and give the framework academics are still working within. He then asked, “Where now and where the future?”
He said that detailed studies, including regional studies, were proving fruitful. This is especially useful in areas that had no witch hunting, such as Sussex, which had only one execution for witchcraft in 100 years. Variables can also be looked at - what the church was doing, politics, legal matters and when villagers wanted witches persecuted.

(2004) raises questions about gender, emotion and fantasy and cultural references drawn on for a believable stories when under torture. Former Eastern Bloc areas are now being studied as well as Nordic countries and the Balkans, where there is a different story including more male witches. Colonial America has produced probably too many books on Salem, but there were other cases. Studies are being done of how different elements can come together for witchcraft beliefs.

There is also the problem of decline. It was once thought that if you give people science they will stop believing in witchcraft, but the idea of transition from magic to science doesn’t work. For example, Sir Isaac Newton was interesting in alchemy. William Blackstone, a legal writer in the 18th century, found it impossible to deny witchcraft. There are differences between elite views of witchcraft – putting it in a box and marginalising it – with general views, in which the population at large retains witchcraft beliefs. This is what is studied by folklorists.

Robin Briggs has calculated that between 40,000-60,000 people were probably executed for witchcraft in Europe. She went through causes of witch hunts and says that, with the pervasiveness of factors, the surprising thing is that number of executions was so low.

The above are the main books those studying the history of witchcraft would be expected to read in an academic course on the subject. They are, of course, just a few of the many books on the historic witch hunts that have been published, and do not even touch the subject of modern pagan witchcraft of the 20th and 21st centuries.

You can read my blog post on the other talks at Worlds of Witchcraft here: http://www.badwitch.co.uk/2016/05/worlds-of-witchcraft-african-and.html
Posted by Badwitch at 08:18

Thanks! I've corrected it now.