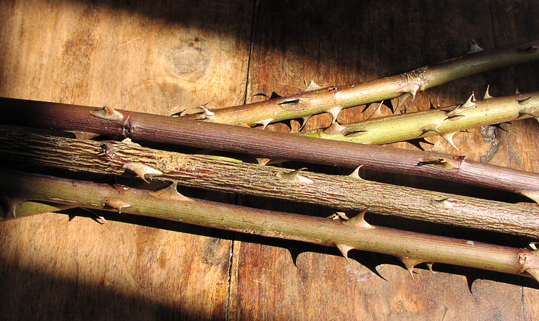 I love wild roses. One seeded naturally in my back garden and grew along the fence between it and that of the house next door. It was a dog rose, the most abundant wild rose that grows in England. 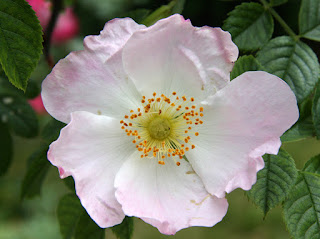 It has simple, pale pink blooms with five petal as well as sharp thorns along the stems. Although all roses symbolise love, for me the dog rose also symbolises the wildness of nature, which can be both beautiful and cruel. I was pleased that a wild rose was thriving in my garden, I happily let it climb along the fence and I delighted in its brief flowering every summer.

But early this spring my neighbour cut it down. We had had an argument about the fence, which had been damaged in a storm, about who should fix it. After the argument my neighbour spent the day taking down the remaining panels and posts of the fence - and took a machete to my rose that was clinging to it. I didn't say anything further to the neighbour. What was done was done and more arguments wouldn't bring the rose back. The long, thick, dead, thorny stems sat at the edge of garden until the time I next went to the recycling centre with other garden waste.

But, as I was about to load the dry stems into the car, I had an idea. I would make wild rose wands. So, I cut several lengths and took them indoors before taking the rest to be turned into compost.

I have several wands already, including ones made from apple wood, hazel and birch. Each has a different energy to use when casting a circle for various magical intents. The apple wand I use for fairy magic; the hazel for healing, wisdom and divination; the birch for spells for new beginnings.

A rose wand could be used for love magic, but also for dispelling enchantment. The rose is sacred to a number of goddesses, including Aphrodite, but also Isis. The rose of Isis appears in the allegorical novel The Golden Ass

as "the sweet Rose of reason and virtue" that saves the hero from a bewitched life in the form of a donkey.

A rose wand could also be used for magic done in secret or to prevent someone finding out something you do not wish them to discover. In Rome the wild rose was the symbol for a real chamber of secrets and was associated with Harpocrates, god of silence, secrets and confidentiality. A wild rose would be placed on the door of a room where confidential matters were being discussed or painted on borders around ceilings of rooms as a sign that topics discussed there were not to be repeated outside. The phrase sub rosa, or "under the rose", means to keep a secret - derived from this ancient Roman practice.

To make the wands, I cut off the thorns from the part intended to be held, sanded down the ends, and then bound the ends of some of the wands in pink and red ribbon. My intention is to keep two for myself and give the others to friends.

As to the argument over the fence - I am tempted to plant a hedge of elder trees where my garden borders that of my neighbour and let the Elder Mother do as she will to anyone who cuts it down. Folklore says anyone who fells an elder tree without permission is in for some bad luck. As to the rose bush itself, there is a happy ending. New green shoots are sprouting from the stump and will in time bloom again.

Pocahontas - Thanks for asking. It is doing fine.

Thank you for posting! My partner gave me a bouquet of roses and I wanted to make some of the stems into wands (though the thorns have been mostly trimmed off) or woven into a pentagram. I’ve also been drying the petals!