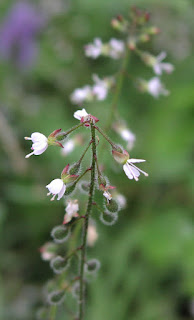 The delicate white flowers growing among my lavender are enchanter's nightshade. Isn't that a lovely name?

I only learnt what it was called last weekend when a pagan friend came around to visit and recognised it. I had been wondering about it and was delighted when I found out.

My mother, who was a keen gardener when she was younger, considered it a weed and would ruthlessly dig it out of the flowerbeds. After she died I decided I liked the contrast of the lavender and the white flowers and left it. (And, to be completely honest, I also don't have that much time for weeding either.) Now I have learnt what a witchy name it has, I will proudly let it grow.

However, despite being called enchanter's nightshade, research showed me that it isn't related to other nightshades, such as deadly nightshade or woody nightshade. Instead it is a member of the willowherb (onagraceae) family. It isn't poisonous, which is a good thing, but it isn't considered edible either. It contains a large amount of tannin, which is an astringent, and I found some references to it being drunk as a tea or applied as a wash to help alleviate rheumatism, gout, infections and fever.

With a name like enchanter's nightshade, you would think it would really come into its own magically - but surprisingly I couldn't find it mentioned in the books I usually turn to when looking up magical plant and herbs. Some online research told me that its Latin name, Circaea lutetiana, which relates to the enchantress Circe of Greek mythology, and that perhaps it was one of the herbs she was thought to have put into her potion to turn Odysseus's shipmates into pigs in Homer's epic poem. With this association, it could be used in spells for enchantment, transformation and even cursing.

According to folklore, in the language of flowers enchanter's nightshade means witchcraft or sorcery - another reason to leave it growing in my front garden among my lavender.

Note: This is for information only and is not medical advice. Always consult a qualified medical herbalist before taking any herbal remedy.