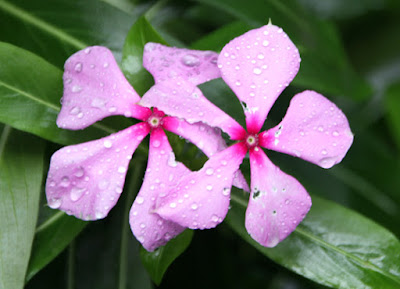 Both the pink flowers above and the white one below are the Madagascar periwinkle in bloom, which I photographed at Kew Gardens last Sunday. The periwinkle is a common garden plant in warmer countries - in some places even considered a weed - but as well as being pretty it has saved lives. The sign next to it in Kew's tropical greenhouse said: "This beautiful plant has proved invaluable in the fight against cancer."


In traditional medicine, Madagascar periwinkle has been used to treat a variety of ailments in Madagascar as well as in other parts of the world where the plant has naturalised.

Whilst researching the anti-diabetic properties of the plant in the 1950s, scientists discovered the presence of several highly toxic alkaloids in its tissues. These alkaloids are now used in the treatment of a number of different types of cancer, with one derived compound, called vincristine, having been credited with raising the survival rate in childhood leukaemia from less than 10% in 1960 to over 90% today.

I went to Kew Gardens to do a Red Letter Days personal guided tour, which my hubby had bought for me as a lovely present. When my guide asked me what I particularly wanted to see, I said medicinal plants - and this was the first one she showed me. The tour was wonderful - very informative - and I took lots of photographs, which I will share on my blog.