A Night of Magic at the Horniman Museum 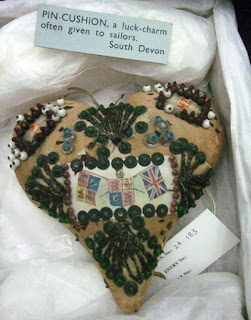 The Horniman Museum, in south London, is a magical place. For a start, Annie Horniman, the daughter of the wealthy tea importer who founded the museum, was an influential member of the Hermetic Order of the Golden Dawn and Samuel Liddell MacGregor Mathers, a founder of the magical order, worked there as a curator.

The museum’s collection also houses thousands of items related to magical belief and practices from all over the world.

This heritage was celebrated at an amazing evening at the Horniman last Thursday, called simply Magic Late. It offered films, dance and music, a talk on the power of wands with OBBOD chief Philip Carr Gomm, displays of the Horniman’s full collection of English charms and a candlelit tour with a costumed storyteller in the role of Annie Horniman, sharing the secrets of her occult circle.

The entire programme was a series of short events that each ran several times throughout the evening, so you could see what you wanted in whatever order you chose – although I didn’t find time to see everything. 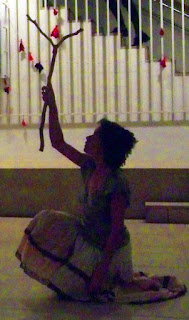 I went to Magic Late with a group of friends and we all started by watching a performance of dance and music called She Who Walks, choreographed by Denise Rowe (pictured right). It was written to commemorate women persecuted during during witch hunts. At the end the audience was invited to make little red dolls in remembrance of the shared heritage of these women. I made one and have kept the instructions, which I’m going to share on my blog in a future post.

Next I went on a tour of the natural history gallery with its curator, Emma-Louise Nicholls. She talked about the traditions, rituals and magic attributed to animals all over the world, including why tortoises are said to be able to summon spirits, why ox skulls are considered lucky and a painful initiation ceremony in which tribesmen transform their bodies into the likeness of crocodiles. Meanwhile, a couple of my friends went to a short film called The Kingdom of Paul Nash, about a mysterious island.

We met up again at the Annie Horniman storytelling walk through the gardens. The pentagram of candles you can see in the photo above was the atmospheric setting for the culmination of the storytelling walk, in the Victorian bandstand. 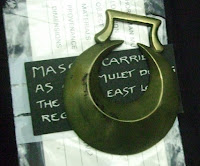 At the end of the evening we all went to hear about Charmed England. This was a chance to find out about the Horniman’s collection of English amulets, talismans and other items people have considered lucky or powerful. It started with a fascinating and informative talk by Philip Carr Gomm, in which I learnt why a wizard’s wand has a knob on the end. (It is to store magical energy, nothing smutty).

After that we heard recordings of people’s reactions under hypnosis to handling a magical charm in the form of a horse brass (pictured left) – very interesting. 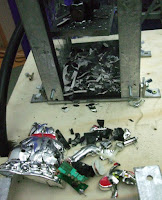 Finally, one of the Horniman staff demonstrated how we are still quite superstitious in the importance we give to charms in our modern lives. She crushed a mug that one of her colleagues had a sentimental attachment to, and asked us to examine our own feelings about it. Earlier in the evening she had crushed a lucky cat ornament. (Pictured right.) I bet most of us have things we have similar attachments to, which we would be reluctant to let be destroyed.

Sadly I didn’t have time to experience everything on offer at Magic Late. I missed a performance about folk healing and the various short films that were shown, but I really enjoyed everything I did see. I learnt a lot too.

Magic Late was on Thursday 13 October at the Horniman Museum and Gardens, 100 London Road, Forest Hill, London, SE23 3PQ. You can find out more about the museum and future events here: http://www.horniman.ac.uk/

The top photo is copyright Ricky, the rest of the photos are copyright Lucya Starza - www.badwitch.co.uk. If you reuse them, credit the respective names. 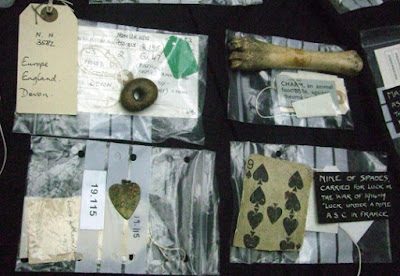 What a shame it didn't run for longer - would love to have seen that!