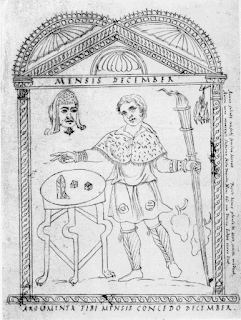 Today is this start of Saturnalia - the Ancient Roman equivalent of Christmas.

It was a festival in honour of Saturn, the Roman god of the bounty of the Earth. After honouring Saturn at temples, Romans would come home to feast, play games and party.

Dice games, gambling and role-playing were popular activities. The latter tended to be masters and servants swapping places and the wearing of masks rather than playing Dungeons and Dragons, of course, but if you are taking part a role-playing game today, know that you are following a rather old tradition.

The celebrations of Saturnalia started on December 17 and lasted right up to December 23. On December 19, people would give each other gifts, rather like we do at Yule or Christmas. Candles were among the most popular presents to give, although pottery ornaments, moneyboxes, cups, perfume, clothing, books, toys and games were other common gifts.

People haven't changed that much have they?

The picture shows a drawing from the Calendar of Philocalus depicting the month of December, with Saturnalian dice on the table and a mask hanging above.
Posted by Badwitch at 09:29

Email ThisBlogThis!Share to TwitterShare to FacebookShare to Pinterest
Labels: history, On this Day, Saturnalia, Yule