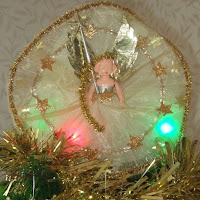 Today is the Winter Solstice - the time of year when the days stop getting shorter. Pagans celebrate the rebirth of the Sun and it is one of the most important festivals of the Wheel of the Year.

So, why do so many pagans have stars, fairies or angels on top of their yule trees instead of images of the golden sun?

Although the bringing of greenery into the home is an ancient tradition, dating back to ancient Pagan times. The decorating of Yule or Christmas trees didn't start until the 15th or 16th century in Germany and Scandinavia .

At first things like biscuits were hung from the trees, but decorations grew more and more elaborate. The tree-topper came later, but was originally a Christian symbol for the star of Bethlehem. Of course, it is possible to read more than just that original symbolism into a five-pointed star. If you make it like a pentagram it is very much a pagan symbol too, after all.

Angels as treetoppers generally represent Gabriel, the messenger of God in the Christmas story. In the UK, decorated fir trees with angels on top only became popular in Victorian times. Pictures of Queen Victoria's Christmas tree, complete with an angel, appeared in newspapers and started a trend.

Many Pagans prefer to have a fairy on the top of a Christmas tree as this seems, well, a bit more pagan. According to the book History Of the Christmas Fairy Doll by Susan Brewer, an old pagan belief was that fairies slept in holly during the winter months. Holly has a very long history of being used to decorate homes for the winter festival, presumably bringing fairies with it.

Victorians loved fairies as much as angels, so the use of them as Yule tree decorations became interchangeable - and sometimes almost indistinguishable.

There are, of course, plenty of secular things you can top your tree with - from traditional finials to bows to darkly humorous Cthulhus.

But should pagans perhaps have an image of the sun on top of their trees, as that is the spiritual significance of this time of year for us? You can get golden treetoppers that look a bit sun-like, including the one pictured, from Four Seasons Liverpool. What do you think? And what do you usually have on your tree?

The photos show a 1950s fairy that is still used on the top of my family's tree, a star treetopper that I made and a gold sunburst treetopper decoration.

I hope you enjoy the Solstice.

I have a lovely Fairy atop my tree...