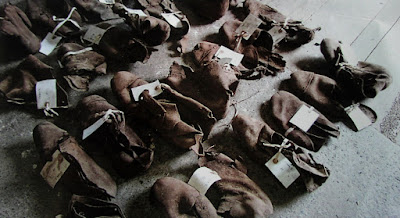 Objects long ago hidden in the walls, floors, roofs and chimneys of people’s homes have always fascinated me. Were they put there for magical protection, sentimental value or just accidentally misplaced?

Last week, historians Ceri Houlbrook and Owen Davies gave an illustrated talk at the London Horse Hospital on just that subject, which they have been researching. The event was called Emotions, Identity and the Supernatural: The Concealed Revealed Project and here are the notes I took: 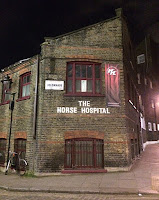 Ceri began by talking about the relationship between people’s emotions and the supernatural and their inner lives, which is the subject of the Emotions, Identity and the Supernatural research project that the historians are involved with. When it comes to people’s unexpressed emotions, how do we get to historical views of this?

One way is to involve experts on different periods of history - medieval, early modern and modern – and also look at people’s domestic and personal lives. In terms of domestic interiors and protection of places people live, the research focused on material objects of magic that people used to protect themselves and those around them. Ceri also looked at mental illness records – internal fears that lead people to mental illness. These included included fears of witches and fairies up until the 19th century, when believing in witches was itself considered symptomatic of mental illness.

The material culture of post-medieval magic is a big area of study. People have been finding dried cats, shoes and written charms in buildings for 100 years or more. When they were found and reported in local press or studied by folklorists in the past there was a tendency to try to find a pre-Christian background. Ralph Merrifield, a 20th century archaeologist and museum curator, wrote classic book covering the topic: The Archaeology of Ritual and Magic. He was trying to find patterns of behaviour.

Looking for continuity of practice for several thousand years raises problematic issues. The practice of concealing objects was widespread from ancient to recent times, but there are no literary sources from these periods as why they did it or why they put objects in those places. There is a lack of both written and oral sources. So, how do we access the emotions of what people were hoping to achieve?

Well, we can’t know for sure, but we can propose theories.

For their project, Ceri and Owen set about gathering as much data as possible on hidden objects, using online resources, word of mouth and gathering as many examples as possible. Rather than put it on a spread sheet they used historypin – an online resource where people can share photos and stories, telling the histories of local communities, including curated collections by site members.

Concealed Revealed has six categories on Historypin of most commonly found objects These are shoes, other garments, animal remains, miscellaneous, bottles, and time capsules. Bottles and shoes seem to be the most common concealed objects, although there are quite a few miscellaneous figurines, including the Burwash figurine of a pregnant woman. Other examples include:
The objects might not be deliberately concealed, but most seem to be. Items in chimney breasts, under floors and on roof beams seem deliberately placed. This leaves the questions:
Shoes
Owen Davies said that hidden shoes are nearly always old shoes. He pointed out that there is a tradition that old shoes bring luck. For example, people throw old shoes after wedding parties. In WWI small boots and shoes were worn as lucky amulets.

In some ways hidden objects are ritual recycling – they are old and worn out, but putting them in a wall is a ritual act and the act itself gives the objects new meaning. The purpose of concealing an item gives it a meaning and then finding it again imbues it with meaning.

Tim Easton, in East Anglia, has been researching the finding of objects and ritual marks. He is one of a small number of people researching this, mainly non academics, in the past 50 years. Adding academic principles and methodologies to this brings new insights and maybe a questioning of old interpretations.

The Northampton Museum and Art Gallery has a concealed shoe index – appropriately a shoe box. It was started by the former curator, June Swann. The index gets reports of two to three shoe finds each month, many overseas, particularly in Canada and Australia. Again there are no written record of the practice of hiding them. Sometimes the shoes are concealed with other items. One was found with a Bible, others with bits of metal

The hiding of witch bottles started in mid to late 17th century. In cases of bewitchment, the urine of the victims, felt hearts and sharp objects were put in a jar and either boiled or buried. This was sympathetic magic to cause the witch pain and make her take her spell off. There is a perceived link between the witch and the victim. Boiling is more active; burying is more for protection - to protect the house.

Bellarmine bottles (such as the one pictured) are often used. Someone obviously thought it was an ideal vessel for magical ritual and the idea spread. Maybe one person started it and others copied it and so the idea was born.

Witch marks
These are ritual protection on wooden beams and stones. Tim Easton has been researching them since the 1970s, but new research is showing how widespread this is. The marks are often flower shapes – but these flower shapes do not appear in grimoires (Owen Davies is the author of a book on that subject). That doesn’t mean they don’t have a ritual purpose, however. There are questions.
These have been widely reported in press as witch marks, including in a PR campaign at Halloween. They are also called demon traps in the press. Owen Davies said that these names are problematic. They might have ritual significance, but there is no source material to say they are demon traps or to do with witches. Do they have other interpretations? Maybe they are just to do with luck in a general sense. The marks might accrue emotional significance from interpreting them too. Meanings can change over time.

Collections of items
Some finds are collections themselves – ritual midens. Sometimes the caches have been added to over time. These are difficult to interpret as there is fragmentary evidence. Some might be more to do with the builders than the owners of buildings. Perhaps it was good luck for the builders.

Ceri said that these objects have complex biographies. The are not crafted to be concealed objects – they are everyday objects, often old and worn out.

The research also looks at what happens once hidden objects are revealed - how people who find them recontextualise them. Interviews with people who discover them show that they tend to be found when a building is renovated or demolished. Some objects are just thrown away. The Ottley collection of five shoes was originally six shoes, but one was thrown away before the significance of the collection was considered.

Often the significance is recognised by the finder and evokes strong emotional response. Laura Potts of Norwich has a shoe that was found by builders during the renovation of her home and in an interview expressed a great attachment to it.

What do people do with found objects?
The historian Malcolm Gaskill said he would put hidden shoes back and that is a trend with many people. Most people put found objects back where they came from. For example, a cat skeleton under hearthstone may be to keep the house rodent free. If you don’t have mice, you want to keep things that way. Removing objects and putting them back shows emotional involvement. Something is going on - why not throw it away or give it to museum?

It shows that people can still believe in the power of objects. Some people are concerned that by removing them they are leaving their home vulnerable to threats. Reconcealment speaks volumes. Magic and superstition are generated in the present day with these acts. Not everyone reconceals them. Some display them, but close to the original place of concealment.

The finder of the Waveney shoe said: “I don’t regard myself as superstition, but have never made appointment to give it to museum.”

There are stories of objects being removed and bad things happening until they were put back.
Psychological studies show we are still prone to magical thinking and if something bad happens after removing an item they will attribute bad luck to that. People think, why risk it?

There is a feeling that the objects belong to the house. Author Alan Garner, back in 1960s, found a shoe in a timber-framed building he owned and brought it down from roof, but kept it in room below where it was found and only showed it to academics studying it.

Even when a concealed object is discovered, its biography and agency continues. Whether it has power or not it impacts its finder as well as impacting its concealer emotionally.

The pictures show: Shoes catalogued on the project, the Horse Hospital,  the book  The Archaeology of Ritual and Magic, a witch bottle on display at Michelham Priory.