I was absolutely delighted when I heard that Belostra, the festival organised by Pagan Future Fests to celebrate both Beltane and Ostara, had this year moved from Balham to Stanley Halls in Norwood, which is just a 10-minute bus journey from where I live in south London. I had a great time when I went there yesterday too. 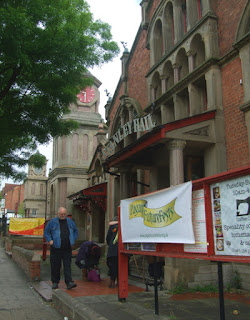 Stanley Halls is a lovely venue. It is a community arts centre in a Grade II listed Edwardian building close to Norwood Junction station. The Arts and Crafts style halls were built between 1904 and 1911 and comprise an art gallery, theatre and assembly rooms. It also has one of my favourite cafes - family-run Coffee Craft, which has a really friendly atmosphere and sells lovely cakes, breakfasts and lunches as well as delicious coffee.

The venue recently came under community management by The Stanley People’s Initiative, a local charity. It regularly puts on musical and theatrical events and holds dance and yoga classes as well as hosting conventions and conferences like Belostra.

It was great to meet up with pagan friends at Belostra, watch drumming and folk dances and listen to interesting talks. I could only stay until late afternoon, although the event went on until 10pm at night, so I missed the evening entertainment of live music and singing. I do hope Belostra returns next year, although I was a bit concerned that it might not have had enough ticket sales to make a profit this year. There were enough people there to fill all the seats at the talks I went to and the cafe had a queue, but overall I felt the event could have been fuller. Maybe more people arrived after I left as Pagan Future Fests was selling evening-only tickets too.