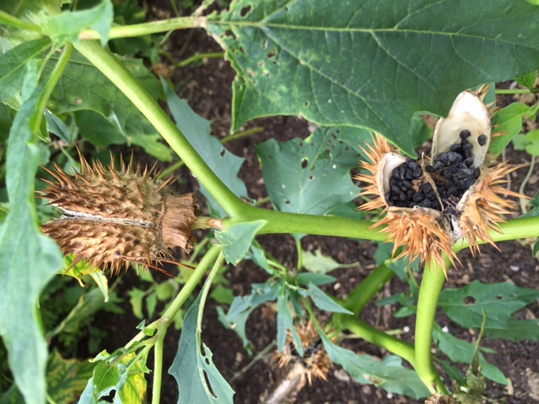 Back in August 2012 I was sent a picture of a two plants in Oxford Botanical Gardens, both were next to a label that said "Mandragora (mandrake)", but the plants were not the same. I posted it on my blog as a pagan eye post, but it caused some discussion as to what the largest plant in the picture actually was.

Allen Tsang, who reads my blog, also visited the gardens and photographed the larger plant himself. He recently sent me his photo, which you can see above. After a bit of discussion and some research, Allen and I agreed that the plant with the spiky seed pods in his photo - and the large plant in the first picture - was probably datura.

Datura - sometimes called thorn apple - is poisonous, but also has a reputation as a very magical plant once used in witches' flying ointments. In the book Herbs of the Sun, Moon and Planets, author Steve Andrews (also of Britain's Got Talent fame) says:


Thorn Apple is ruled by Jupiter possibly because of its expansive qualities. The plant distributes itself across patches of ground very readily by self-seeding. If consumed internally, Thorn Apple is a very dangerous hallucinogen that can cause visions of other places in a vastly altered reality. An individual intoxicated by this herb may experience seeing people they know or being in familiar locations. It creates a dream world that is experienced as being as real as this world. This ability to move a person affected by the alkaloid drugs in Thorn Apple out of where their physical body is, so that they believe themselves to be elsewhere, is another quality of Jupiter. Thorn Apple was an ingredient in flying ointments used by witches. It contains the dangerous substances atropine and hyoscyamine and scopolamine.

The photo on this page is copyright Allen Tsang. Do not copy or download it without permission.

Link and previous post
http://www.badwitch.co.uk/2012/08/pagan-eye-magical-mandrake-or-mandragora.html
Herbs of the Sun, Moon and Planets
https://www.thesun.co.uk/tvandshowbiz/3618214/britains-got-talent-star-steven-andrews-is-a-wacky-wizard-who-grows-mind-altering-drugs-at-home-to-boost-sex-life/
Posted by Badwitch at 07:46

Thanks for quoting from my work, and yes, the plant in the photo is Datura stramonium. It is very common as a weed in some places. I used to see a lot of it in Tenerife.