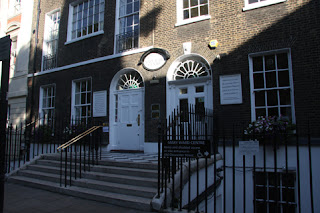 This autumn Kenneth Rees is again running courses in esotericism at the Mary Ward Centre in London. The first course is called The Varieties of Esoteric Christianity, but Ken said: "It will be, in fact, far more pagan ,etc, than it might appear at first sight!"

He added: "The college allows one class free for visiting. Any class can be taken as a guest, not necessarily the initial one."

Here is the information about the six-week course:


The Varieties of Esoteric Christianity
Since the earliest beginnings of Christianity and its subsequent crystallisation into orthodox forms - both in the West and in the East - there have been alternative interpretations, typically considered to be heretical by the mainstream churches. This course looks at a sample of these from the 18th through to the 20th centuries and examines some leading thinkers and/or organisations that gave birth to such complementary theologies and practices.

From the 18th century we look at Emanuel Swedenborg, so influential for William Blake, and the later founding of the New Church. From the latter part of the 19th century we encounter ex-Theosophists including Anna Kingsford, whose work inspired the Order of the Cross; Rudolf Steiner, whose Christian Community became the religious wing of the Anthroposophical Society; and, in addition, Dion Fortune whose Society of the Inner Light remains to this day a Christian esoteric fraternity.

Finally, Annie Besant, the long-term president of the Theosophical Society, often reveals in her writing a more favourable opinion of mystical Christianity than did her mentor, H.P. Blavatsky.

The photo shows the Mary Ward Centre
Posted by Badwitch at 08:00