Apparently Today is the Most Miserable Day of the Year 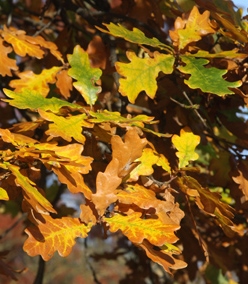 I don't know about you, but I had a pretty good day today. It was nice and sunny, I went to an art exhibition at Dulwich Picture Gallery, had lunch out at a nice French cafe and spent the afternoon taking photos for the front cover of a new book I'm working on.

However, it seems I'm unusual. According to research, Sunday September 17th is possibly the most miserable day of the year - worse than any day in January.

Researchers took an in depth look at the mood of people in the UK and discovered that today is the day we hit our post summer low, with 61 percent admitting they feel like “that’s it” for another year. And according to the study – reasons for our malaise include the thought of having to put the heating back on (24 percent) and dreading the stress of getting ready for Christmas (23 percent).

Two in ten resent the traffic getting worse post the school holiday lull - with 26 percent of men admitting it drives them to distraction - while a further 19 percent HATE packing away their summer clothes for another year. A further 16 percent said that having put on weight during the summer has left them feeling depressed, while 14 percent said they were simply “knackered” from looking after the children during the school holidays.

A dispirited four in ten confessed they were simply not ready to say goodbye to the summer.

According to the data - a quarter of all us reckon September is even bleaker than January, with the 17th voted the most bleak day. In fact, 41 percent of those polled claimed mood swings and mild depression is setting in now that we are on the road to winter and women seem to struggle more than men with winter blues the study revealed.

Almost half of those surveyed confessed they feel sad that they won’t see their friends or socialise as much as they did in the summer.

Dr Jen Tan from A.Vogel, a traditional herbal remedy manufacturer who commissioned the study said: “The onset of winter signals a surge in levels of stress for many people which can lead to sleep problems and anxiety which all impact on our immune system as the winter approaches.

"Winter blues or SAD, as it has become known, means many people now recognise that they struggle with the winter months and autumn is a time to ‘batten down the hatches’ and prepare oneself physically and mentally for the onset of winter.

"This is where traditional herbal medicines such as St John’s Wort and Avena Sativa can help with anxiety and low mood and are a good alternative for many who may need some support during these months.”

However, it’s not all doom and gloom as 64 percent of Brits are looking forward to ditching salads and healthy light lunches for hearty roast dinners. For 39 percent of us, nights at home are our favourite part of winter. According to the poll, despite the loss of daylight and the increased darkness that the winter brings, 23 percent are excited about the clocks going back in October so we get an extra hour in bed.

I personally like autumn and in particular Halloween - or Samhain as us pagans like to call it. No, I'm not feeling miserable at all.
Posted by Badwitch at 19:49

Email ThisBlogThis!Share to TwitterShare to FacebookShare to Pinterest
Labels: autumn