A Fantastic Day with Harry Potter: A History of Magic 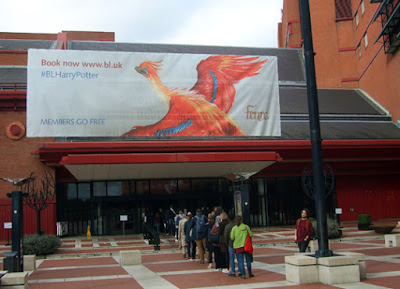 Harry Potter: A History of Magic, the exhibition that started today at the British Library, is fabulous. Whether you are a fan of the Harry Potter books or interested in the history of real-world magic, you will not be disappointed.

I was very lucky to get tickets for the day it opened and had been looking forward to going for a long while. Sometimes, when you are eagerly anticipating something, the event itself is an anti-climax. Not this time.

The exhibition is gorgeous. It has been designed to make you feel as though you might be walking through somewhere in Hogwarts. Separate rooms are themed on subjects taught at Hogwarts, JK Rowling's fictional school for witches and wizards. These cover potions, alchemy, herbology, charms, astronomy, divination, defence against the dark arts and care of magical creatures.

A central magnificent artifact is on display in each room. For example, the potions room has the Battersea Cauldron, for alchemy there is the superb Ripley Scroll and Care of Magical Creatures has a historic bestiary with life-size colour pictures of birds.

Some of the display cases around the walls show genuine occult books, items and pictures; some show pages from JK Rowling's original manuscripts and notes for novels; some have interactive screens where you can do things like potion-making or tarot reading. There are also beautiful drawings and paintings used for illustrations in the books.

What I also liked about the exhibition is that it didn't feel particularly crowded, even though all tickets for the day were sold out. This was at least partly because everything was set out very well so people weren't channelled along a single route in each room. If there was a crowd in front of one cabinet I could go and look at another one, then come back when the first one was less busy.

It was pitched at just the right level to appeal to Harry Potter fans of all ages as well as those interested in history and magic. I loved it.

Harry Potter: A History of Magic is on from now until 28 February 2018 at The British Library, 96 Euston Road, London NW1 2DB. There are timed slots every day. Tickets are £16 adults, £8 children. https://www.bl.uk/

You aren't allowed to take photos inside the British Library, so the photo at the top is of the outside and the other shows a book cover.