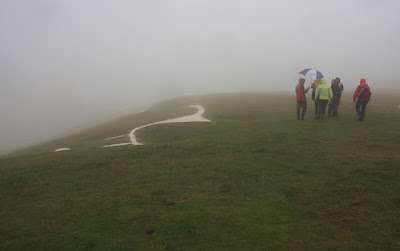 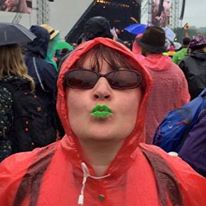 British people moaning about the weather is, I would say, an accurate stereotype. We can have five seasons in one day. And for any of us pagans planning an outdoor ritual or trip to a festival, a brolly or rain poncho is essential. The photo at the right shows me wearing mine at one wet event (along with sunglasses and some fetching green lipstick), while I took the picture at the top on an August trip to Uffington White Horse when it was so wet and foggy it was hard to find the ancient chalk figure on top of the hill.

Apparently the average person living in Britain spends 104 hours, almost five full days each year - that's 10 month of our lives - moaning about the weather, according to a new report. We average 120 minutes every week complaining about the lack of sunshine. That’s the equivalent of four days and seven hours every year, according to Tetley’s State of the Summer Report, which the tea producer commissioned with weather and psychological specialists to coincide with the launch of its new Sunshine Tea with Vitamin D.

According to the figures, we check the forecast eight times a week, discussing the outcome with partners and work colleagues at least five times a week. There has been a financial cost too: the research revealed that the poor summer weather has cost those of us living in Britain an average of £149 each over the summer months, due to cancelled events, wasted food and clothes we never got to wear. On average, we have had to cancel five planned summer activities, including three failed walks in the country, one abandoned BBQ and two postponed day trips. 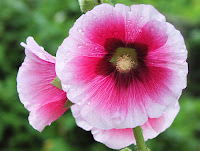 The Tetley State of Summer report also confirms the UK’s summer was a “wash out”, with average rainfall and weather systems during this summer more typical of winter months, in the words of leading meteorologist, Prof Liz Bentley.

To restore help restore some feel good factor, Tetley worked with psychologist Honey Langcaster-James, to explore the impact a lack of sunshine has on the mood of the nation, and to find some suggestions for combating our resulting frustration.

She said: “A sunny day can boost the mood and lift the spirit. But after a summer deemed by 44 per cent of Brits as a ‘wash-out’, it’s important to find those little things that evoke that summertime feeling looking ahead.

“Getting regular exercise has been proven to help boost mood and reduce symptoms associated with depression, so it’s more important than ever during the winter months to make time for exercise. On a smaller scale, little touches like using a bright light box, designed to mimic dawn with bright sunlight early in the morning to wake you up naturally, as well as summertime scented bath products and toiletries can help evoke that summer feeling.

“Maintain your Vitamin D levels by eating a diet rich with foods that contain Vitamin D, and from food supplements or enhanced drinks like Tetley’s new Sunshine Super Tea."

LOL I love this , it is so true you cant go anywhere with out the weather being talked about.