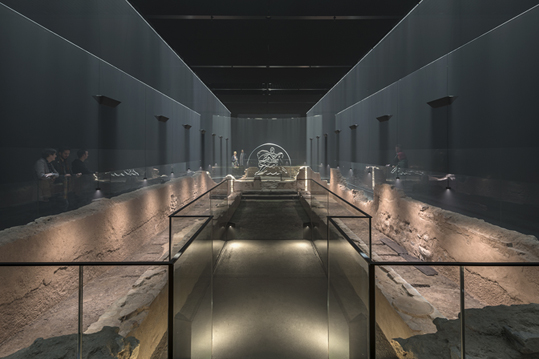 The Roman Temple of Mithras is reopening in London next week. Sadly not as a place where modern pagans can worship the ancient Persian solar deity the Mithraeum was originally dedicated to - or, indeed, worship Bachus, the Roman god of wine, which the temple was rededicated to in the fourth century - but people will once again be able to visit the ruins of the historic temple.

Dating from the third century, nearly 1,800 years ago, the Mithraeum will be open to the public on Tuesday, 14 November, in a reconstruction on the site of its original discovery in the heart of the City of London. 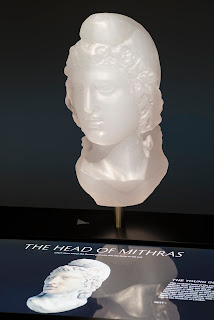 According to details from Bloomberg, the London Mithraeum Bloomberg Space is a free new cultural destination created as part of the development of the financial data and communication institution's new European headquarters.

With its own entrance along Walbrook, the three-storey space will showcase the reconstructed temple seven metres below the streets of modern London, at Roman ground level. The temple is introduced on a mezzanine, directly above it, by a display of  projections and interactive kiosks that invite visitors to explore the practices and symbols associated with the cult of Mithras.

At street-level, Bloomberg Space will host contemporary art commissions reflecting broadly on the history of the site, as well as a huge vitrine displaying more than 600 remarkable Roman artifacts found during recent excavations at Bloomberg.

The immersive temple reconstruction uses carefully directed lights, haze and sound to bring the temple’s remains to life, and to evoke the rituals and activities that took place within its cave-like walls.

Michael R. Bloomberg, founder, Bloomberg LP, said: “London has a long history as a crossroads for culture and business, and we are building on that tradition. As stewards of this ancient site and its artifacts, we have a responsibility to preserve and share its history. We are thrilled to be part of a project that has provided so much new information about Roman London.”

You can visit the London Mithraeum free of charge, Tuesday to Sunday, from 10am to 6pm, although advance booking is required via londonmithraeum.com.

I've booked a ticket for later this month, and I am really excited about it because visiting the Mithraeum has long been something I have wanted to do. A couple of years ago I blogged about the site, and about artefacts associated with it were are in the Museum of London: http://www.badwitch.co.uk/2014/12/pagan-london-temple-of-mithras.html

Here are also links to what some newspapers had to say about it yesterday:

"Reconstructed Roman Temple of Mithras opens to public in London" - story at The Guardian: https://www.theguardian.com/science/2017/nov/08/reconstructed-roman-temple-mithras-opens-public-bloomberg-hq

"Reconstructed Roman temple opens beneath the City of London" - story at The Telegraph: http://www.telegraph.co.uk/news/2017/11/08/reconstructed-roman-temple-opens-beneath-city-london/