Pancake Day: What Your Pancake Says About You

Are you a tosser or a turner?

Apparently whether you toss or turn your pancakes could say something about your personality. A survey indicated that people who toss their pancakes have more sex, take bigger risks and earn more money than those who turn them. 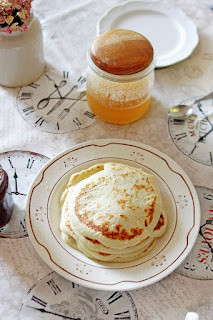 Most of us prefer to turn our pancakes carefully with the help of a spatula. Nevertheless, 43 per cent throw caution to the wind and flip their pancake in the air to turn it. The study uncovered that those who play it safe when it comes to their pancakes are more introvert – with 24 per cent describing themselves as shy, compared to 18 per cent of those who flip or toss.

Psychologist and founder of the blog Life and How to Love It! Honey Langcaster-James said “It seems that the way people cook their pancakes is reflective of the way people respond to life in general. Some people are more cautious and play it safe making them dependable and consistent but also sometimes limiting the fun they have and what they can achieve. Others are more confident and take more risks, this can be seen as flamboyant or even unreliable, but it also provides opportunities for more fun and has the potential for a bigger pay off in certain situations.”

Scrying with your pancake

Whether you toss or turn your pancakes tonight, you could also have a go at finding out more about yourself - or what the future might hold - by scrying with your pancake. Scrying is a word for divination or fortune-telling by looking into things for messages or signs.

Once you have cooked your pancake, look at where the batter has cooked unevenly. The shapes and patterns that have formed by the darker and lighter areas on the pancake's surface could have a message for you. You can read your pancake in much the same way as you might read tea leaves, but looking for symbols and pictures and interpreting what they might mean. What do they remind you of?

If you want to eat your pancake before it gets cold, take a photo of it before you cover it with maple syrup, honey, or sugar and lemon. Then, after you have eaten it, you can scry into the photo of your pancake at your leisure.

Photo: Pancakes mit Honig (pancakes with honey) by Marco Verch, shared under Creative Commons from the Wikipedia entry on pancakes.  The survey mentioned in this post was a poll of 2,000 Brits by Clarks Maple Syrup
Posted by Badwitch at 11:01