Mothering Sunday: Christian or Pagan? Does it Matter? 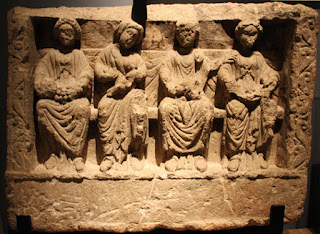 Next Sunday, March 11, is Mothering Sunday, often shortened to Mother's Day - a traditional day to bring our mum a bunch of flowers and maybe treat her to a nice dinner.

The day always falls on the fourth Sunday of Lent, three weeks before Easter Sunday. The middle Sunday of Lent has long been associated with mothers in the Christian calender; as on that day - Laetare Sunday - it was traditional for people to return home to their mother church.

Mothering Sunday was formalised in the UK in the early 20th century when a vicar’s daughter named Constance Smith read a newspaper report of a campaign in America to celebrate such a day across the Atlantic.

So far, so Christian.

However, there are some suggestions the festival had pagan origins. The 1959 edition of the Encyclopædia Britannica gave this description of Mother's Day: "A festival derived from the custom of mother worship in ancient Greece. Formal mother worship, with ceremonies to Cybele, or Rhea, the Great Mother of the Gods, were performed on the Ides of March throughout Asia Minor."

Of course, just because festivals to honour mothers happened in Ancient Greece and Rome, doesn't mean there is any direct link to the Christian festival. The fact that the happen at about the same time of year could just be coincidence.

American Mother's Day, in May, is considered a secular holiday.

But does it matter whether the festival is purely Christian or has pagan roots, or if other countries have secular days at different times of the year to honour mothers? Personally, when my mother was alive, I would always bring her a gift for Mother's Day and usually take her out for Sunday lunch. I did it because I wanted to make my mum happy.

The other issue is whether Mothering Sunday is too commercialised these days. It is estimated that close to £1.5 billion was spent on Mother’s Day last year, in 2017. That figure includes money spent in shops and also dining and entertaining. It is clearly big business.

However, research suggests that mothers aren’t bothered about receiving a lavish gift on the day. Rather, they’d happily spend time with their children instead.

What are your thoughts on the matter?

The photo at the top shows the Four Mothers - a Roman carving at the Museum of London.

What a lovely piece of writing.

My first mothers day as a single Mum was a sad one. I had spent the day missing my kids who were with their dad as usual for the weekend, and I was wondering what they would do for me when they got home that evening. Nada, nothing, not even a good wish. The weasel (sorry if thats offensive to weasels) hadn't primed them at all to even draw a card for me. From then on I resolved that they would not go to their dad's ever again on Mothering Sunday, but of course he preempted that by emmigrating. With no one to remind them it was Mothers day, I took it on myself, to tell them, it was Mothers day and we would be going out for a family day, and thats the way it was for years. Sometimes we would go somewhere for a posh meal, other days it was unplanned, and we often ended up at the end of Brighton Pier with fish and chips and silly games in the amusements, which were usually banned because we couldnt afford such frivolity. Brighton was/is over and hours drive from home and we sometimes stopped en route for a mooch around another town. As they got older the format changed a bit and now they have their own families, everything is different but often I visit one of them on mothers day and have my lunch cooked or bought for me - yes I taught both my boys to cook!

Suzie, thanks so much for your response. How sad that your children's dad didn't get them to draw you a card! I am so glad you made things better in later years.

I've a very greedy approach to celebrating. I choose to celebrate EVERYTHING. Life is short and there's no promise of anything after.
I used to love researching different festivals for my youth work job. Tracing the similarities that run through them (that united us more than our differences). I used to love making cards with teens to mothers or someone like a mother to you.