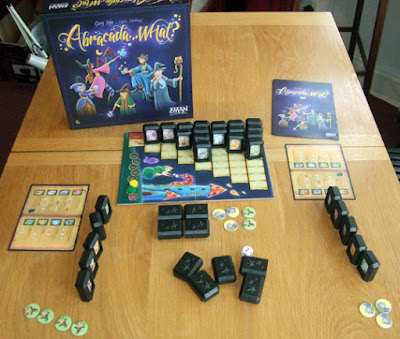 I picked up a copy of Abracada...What? in The Works sale largely because it was cheap. The theme also appealed to me and I'm writing a series of blog posts about the way witches are portrayed in games, so getting it was a no-brainer.

The game is about casting spells. It looked as thought it had some witches and wizards on the cover - as well as having the words Abracada...What? in a font remarkably similar to that of the old TV series Bewitched. Actually, I discovered that inside it talks about wizards, not witches, but I thought I'd blog about it anyway.

Abracada...What? is a family game with simple rules and is quick to play, but it has enough strategy to also make it fun as a light game for adults. I really enjoyed playing it with my hubby yesterday afternoon and we both agreed that we'll happily do so again.

The idea is that the players are wizards competing to be top mage by casting spells at each other. Last one standing wins each round.

Everyone has a set of tiles representing the spells at their disposal. However, they don't know what spells they have because they set the tiles up facing away from them. Everyone can see the other players' tiles and what's been cast already, so they can try to deduce what they are likely to have. If you guess wrong you lose a life and your turn ends.

It is a fun little game for two to five players. If you like board games and can pick up a copy cheaply enough, I'd say get it. It is suitable for children aged about seven or older as well as adults.

You can view Abracada...What? on Amazon and also at The Works.
Posted by Badwitch at 08:00