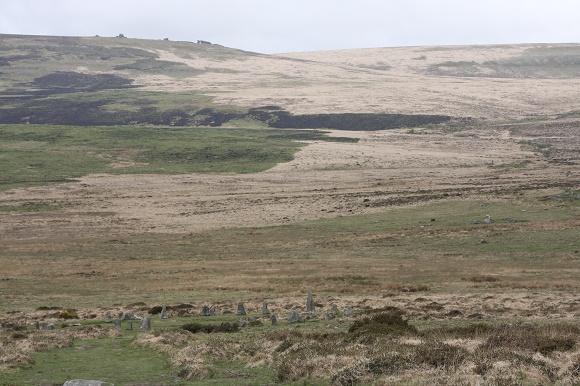 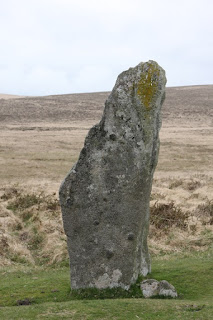 You can just make out Scorhill stone circle on Dartmoor at the bottom of the photo at the top of this page. It is actually a reasonably large stone circle, but is very hard to spot in the landscape of the moors until you get up close.

The picture to the right shows the largest of the stones. It is the north-west stone in the circle.

Although it doesn't appear to line up with any landmark on the ground, if you stand in the centre of the circle you are supposed to be able see the most northerly moon set over its tip. Because of this there is some suggestion that Scorhill stone circle might have had some lunar significance in ancient times.

According to A Guide to the Stone Circles of Britain, Ireland and Brittany, it originally had 65 to 70 stones, but now only has 34, with only 25 standing in the circle.

If you want to find the stone circle, it is easiest to park a car at Batworthy corner and walk about 1.25 miles onto the moors to the site. You have to cross the North Teign River and a couple of streams  via old stone clapper bridges. It is a lovely walk, but do wear good walking boots and waterproof clothing, as it can suddenly get very wet.

You can view A Guide to the Stone Circles of Britain, Ireland and Brittany on Amazon.