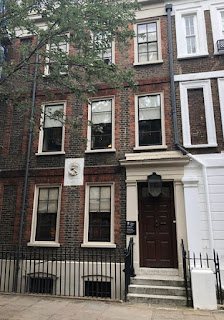 I’ve long been fascinated by the topic of witchcraft in the couple of hundred years before the advent of modern Wicca in the mid 20th century. The practical cunning craft of our ancestors seems to me an area modern witches ought to be looking at if we want to improve our current spellwork. So, I was delighted to get a ticket to hear Professor Ronald Hutton talk about exactly that subject at Carlyle’s House in London last week.

Here is a write-up of some of the notes I took (I apologise that I might have spelled some names incorrectly):

In 1736 bloodthirsty Tudor laws against witchcraft were repealed, meaning that people could no longer be prosecuted for witchcraft and hanged if found guilty. The law changed again after 1940.

Although there is a lot of information available on witchcraft and cunning craft between those times, only three historians have researched it extensively: Professor Owen Davies (author of Popular Magic), Jim Baker (author of The Cunning Man's Handbook); and Professor Hutton (author of The Witch). The information available on cunning folk takes the form of personal papers, newspaper reports, trial records and Victorian folklore collectors’ notes.

Two types of magic were recognised – bad magic and good magic. No one admitted to doing bad magic – the people who did so were called witches. Between 1740 and 1940 the word “witch” was a term of abuse in popular culture. In more educated circles the terms black witch and white witch might be used, but that wasn’t the common perception.

Also, in popular belief, a witch was generally thought of as an old woman who wore black and had a cat. In practise, individuals were more likely to accuse someone of being a witch simply because they had a grudge against them – that could be a prosperous farmer rather than an old hag.

People who did good magic were called charmers or cunning folk.

Charmers were “one-trick wonders”. They might be good at curing warts, but nothing else, for example.

Cunning folk, wise women or wise men were all-purpose magical service providers. The would find stolen goods, do healing, perform divination and act as witch-busters in that they broke the curses allegedly put on people by witches. In Cornwall they were called pellers, which is short for expellers.

What sort of people became cunning folk?
A census of Whitby in 1816 recorded eight cunning people. They were generally upper working class or middle class. They mostly lived in towns rather than in isolated country areas – although that is probably because being a cunning person was a craft. Like most artisans, you needed a lot of clients in order to make a living. They often had a second job too.

There were a range of styles. One well known example is from 1850 in Hadleigh, Essex, is James Murrell, who was also a cobbler and wore iron goggles and a tailcoat. He was renowned for busting the curses of witches. He became famous 40 years after he died due to the book Cunning Murrell by Arthur Morrison.

Also in Essex, another cunning man was a Frenchman known as Dummy because he was deaf and dumb. He communicated in writing. His skills included fortune-telling and finding stolen goods. Sadly, Professor Hutton said, he had “a miserable living and a miserable death”. An ill woman said her cold was caused by Dummy and persuaded people to test him for witchcraft by throwing him in a duck pond. They didn’t pull him out in time, and he drowned. His killers were jailed.

Devon resident Hannah Hembury [I’m not sure I’ve spelled that name correctly] by contrast was a neatly dressed woman who kept cats and was famous for her apple puddings. She took to running a protection racket as well as being a cunning woman. She demanded money from farmers in exchange for protection from witches. Her rates and demands soared until a group of the farmers got together, went to a rival cunning man and paid him to curse her. She died.

Cunning folk needed to be literate – a rare skill. They owned books and manuscripts and kept their own copies of spells. There was trade in books between cunning folk as they would copy bits out and then resell the book. People believed books were intrinsically magical. Some have survived in record offices and local libraries. There are diaries of clients who went to cunning folk and folklore collectors also recorded details. Court records hold some accounts of books, which might have been confiscated and kept as evidence.

Occult bookshops, such as Denby’s in Charing Cross, sold books covering herb lore, astrology, palmistry, ceremonial magic and old grimoires.The library of Welsh cunning man Henry Hurries [sp?] was discovered in its entirety – probably because he was in an isolated location and not in a position to easily resell them. It is now in the National Library of Wales.

There were some correspondence courses in magic and a few magic schools, including one run by Dr Parkin in London.

Charmers learnt their spells orally, but some were written down to activate the spell. Some of their spells are very old; frequently traceable to late medieval Catholic Christianity.

Although they might use herbs, there was often a difference between the way a charmer would use them and a modern herbalist’s methods. A charmer might, for example, put the herbs in a pouch for the client to wear and have to pick them only at a certain time of the year, but a modern herbalist would rely on the chemical qualities of the plant to make a remedy.

Records show that charming seemed to work. However, charmers seemed to treat ailments that would respond to a boost of a client’s nervous system. Charmers made amulets and recited charms. They might also make clients scry into a bowl of water and use applied psychology to help them solve their problems. There was also a lot of use of sympathetic magic.

Witches
Witches in England were almost always solitary, although sometimes worked in pairs such as a mother and daughter. In Celtic countries such as Scotland, Wales and West Cornwall, they did get together more.

The word “coven” comes from the trial of Isobel Gowdie. Coven is short for conventicle. It became famous in the 19th century as a word for a group of witches.

Were witches, cunning folk or charmers pagan?
Devout Christians call all magic users pagans, but if you look at the records then you see that charmers identified as following a wide variety of religions or were athiests. If you look at the magic books used, you see that they don’t tend to have pagan god names in them. Witches were thought to be Satanists.

Charmers often had charms that were very old, but were mostly Christian. Cunning folk rarely passed their skills down for more than a few generations.

A few families were regarded as witch families, but these were often the "neighbours from hell". It is rare to find details of any initiation ceremonies, although witches were said to give their soul to the Devil in legends.

Payment
Cunning folk did accept payment, as what they did was a craft. Charmers often didn't, but would usually accept gifts from those they treated.

Ronald Hutton's talk on Village Witchcraft was organised by A Curious Invitation. You can find out about other talks and events in the series here https://www.acuriousinvitation.com/events.html

You can view The Cunning Man's Handbook on Amazon, view The Witch on Amazon, and view Popular Magic: Cunning-folk in English History on Amazon.