Create Your Own Tarot Deck & a Cat in a Box 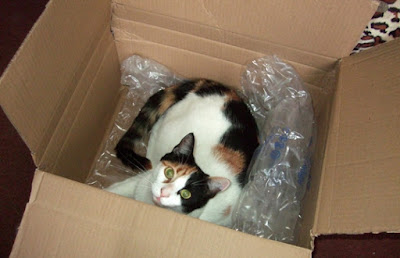 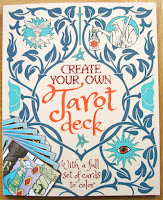 Here's a photo of cat in a box and two others showing the latest addition to my large collection of tarot decks - only I'm supposed to colour it in before I start using it. (The tarot deck, that is, not the box.)

I really like the idea of making my own tarot set. I've thought about doing it by taking photographs of places, people and landmarks and putting together a Tarot of London from scratch. I even started, but didn't get very far before a far better London Tarot was published than I could make.

The Create Your Own Tarot Deck is a kind of half-way house between buying a printed deck and making your own, as what you do is punch out the cards and colour them in. Nevertheless, you are still putting a lot of your own work into each card. You will certainly be studying the images, symbols and correspondences as you go about it.

The artwork is a simplified version of the Rider-Waite-Smith deck and the book includes colour images of many of the cards that you can follow if you want to. It shouldn't be too difficult task, just a lengthy one. The backs are already printed in colour, so you don't have to do anything to that side of the cards. 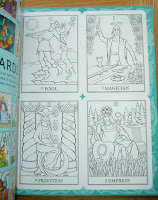 At the front of the book there is an introduction offering a brief history of the tarot, basic spreads and a short meaning for each card. That's useful for beginners, but doesn't offer much much for experienced readers. It did have to include something like that, of course.

I ordered my copy of the Create Your Own Tarot Deck last week because it was on a particularly good deal at The Works. It was £4 instead of the RRP of £9.99, plus I took advantage of one of the retailer's special days when it was offering an extra 25% off all purchases.

I also bought a few other things - including some boardgames - at the same time, so I got free postage and packing and the large box you can see my cat Tuppence enjoying.

Here is the link to the deck at The Works

Battle for the correct answer. At the point when a tarot card turns out with more grounded implication when contrasted with the different broadens, study the tarot card. Relationship Advice