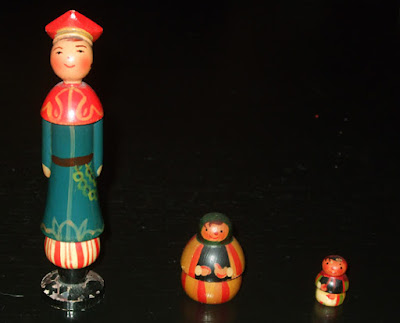 These little wooden dolls in traditional costumes were sent to my family from relatives in Poland back before I was born, but I was always fascinated by them when I was a child.

The tall gentleman is in fact a needle case. He comes apart where his jacket meets his stripey trousers. The mother and girl are nesting dolls. The mother comes apart at the waist and her baby fits inside her. 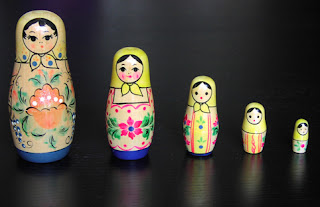 I later bought a set of Russian Matryoshka dolls, which you can see in the photo to the left.

When I first read the fairy story Vasilisa the Beautiful, I imagined Vasilisa's magical wooden doll as being like the little pair of nesting dolls that had been handed down in my own family. To summarise the tale, on her death-bed, Vasilisa's mother gives Vasilisa a little wooden doll that she says will help her solve any problem.

Her father remarries, but her stepmother and stepsisters are wicked and cruel. When their only candle goes out, they send Vasilisa to their neighbour in the woods, Baba Yaga, to beg for a light. The evil hag sets Vasilisa seemingly impossible tasks to perform, saying she will give her a light if she manages them, but will eat her if she fails. To cut a long story short, Vasilisa succeeds with the help of her magical doll - although the light she brings back burns her wicked stepmother and sisters to a crisp. 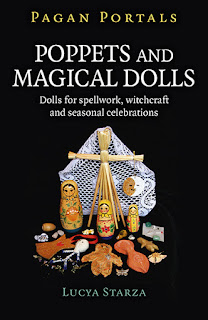 I retell a longer version of that story in my book Pagan Portals - Poppets and Magical Dolls, which is officially published tomorrow, 31 August. Three of my Matryoshka dolls appear  in the photo I took for the front cover of the book. At the end, I look at the history and meaning of nesting dolls:


In the first chapter I related a Russian fairy tale about a magical doll, so it seems right to end the book with another Russian doll tradition – the Matryoshka, or nesting doll. This is a set of wooden dolls of decreasing size placed one inside another. The name ‘Matryoshka’, which literally means ‘little matron’, is a diminutive form of the Russian female first name ‘Matryona’. They are also known as ‘babushka dolls’, babushka meaning ‘grandmother’ or ‘old woman’. It actually isn’t a very old tradition. The first set of Russian nested doll was made in 1890 by Vasily Zvyozdochkin from a design by Sergey Malyutin, a folk crafts painter at Abramtsevo. They were apparently inspired by a doll from Japan.
The outer layer is usually a woman dressed in Russian peasant costume; the figures inside can be of either gender and the smallest is usually a baby. Modern Matroyshkas can depict all sorts of things, from fairy tale characters to politicians.
Although this isn’t an ancient tradition, the Matroyshka doll is used as a metaphor in Jungian psychology for the levels we have within ourselves and in our relationship with societal forces. Understanding those different forces and how they affect us can help us in a quest for personal development and growth, which is often something those within modern pagan witchcraft use their magic to work towards.

My book Pagan Portals - Poppets and Magical Dolls is published by Moon Books. On Saturday 8 September at 2pm, I will be reading from it and signing copies at Wicca Moon, 50 Well Hall Road, London SE9 6SH. For further details contact Shirlee@wiccamoon.org.uk, call 0208 850 7803 or visit www.facebook.com/WiccaMoonEltham/

So happy and excited for you! For me too because I pre-ordered your book months ago. Can't wait to get it.

Thank you! Hope you enjoy the book!