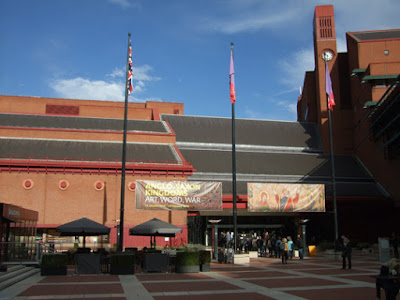 Yesterday I went to the new exhibition at the British Library: Anglo-Saxon Kingdoms: Art, Word, War.

As a pagan and a witch, I was hoping to see items from the pre-Christian time of the Anglo-Saxons and also herbals and spells from later centuries. I wasn't completely disappointed - the first room contains pagan artifacts inscribed with runes and ogham from the early days of the Anglo-Saxons in this country.

Later there are a few charms, including one for protection written in the margins of a Bible. There is a magnificent herbal and one beautiful metal object carved with a message that has never been deciphered, but might be a spell. That fascinated me. I was also delighted to see the book that contains the original story of Beowulf.

However, if you are thinking of going to the exhibition specifically to find items relating to paganism, magic and the occult, I should warn you these things are few and far between. Most of the exhibition space is given to magnificent illuminated Bibles and other religious books. There are also texts relating Anglo-Saxon laws and governance, and a large display of the Domesday Book that was commissioned after the Norman conquest.

I love beautiful books of all kinds and find history interesting in general, so I enjoyed the exhibition, but I was a little Bibled-out by the end of it.

You can view the book published to accompany Anglo-Saxon Kingdoms on Amazon.